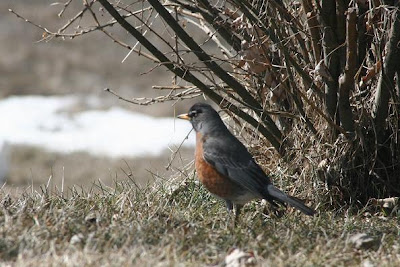 I spied a pair of robins this afternoon amongst the caragana bushes.  I snapped up my camera and took these photos from my window.  Then Sue chased them off.  She loves to chase birds. 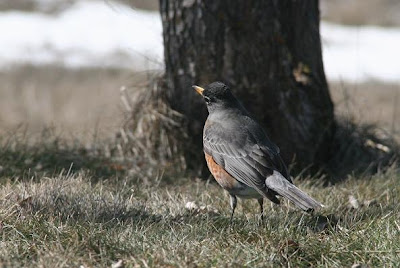 Doesn't Robby Robin look curious?
It was a warm, windy 50-ish degree day,
very like March.
I've read that the male robins often arrive first in the spring.  You can tell them by their bright orange-red breast and their darker capped head and white eye ring.  The female has a much duller color.
We had our afternoon coffee and tea and a celebratory
lemon cupcake on the front porch in the sunshine. 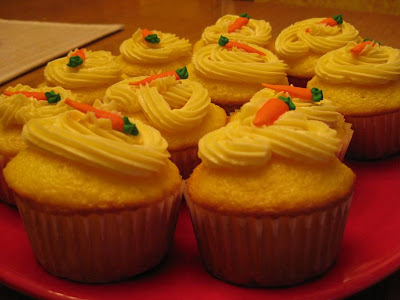 I made a lemon box cake, added some lemon zest to the batter and then topped the cupcakes with vanilla buttercream frosting (Julia Child's) and a sugar carrot.
Very Spring, dontchathink?
I saw a really interesting happening today on the stock pond by our house.  There have been Canada Geese coming and going  these past couple of weeks and today I saw a pair of geese walking across the ice of the pond to the other side where four other geese were standing tall and erect, watching them cross.  Once the pair got to the bank, they lowered their heads to the ground and continued to walk toward the other geese who remained upright.  As the pair walked, they made a very low, groaning sound.  A humbling sort of sound.  I had never heard nor seen this before.  The two continued in the bowed state and then would stop and turn away from the four.  A moment more and the pair would try to approach the four again, with heads lowered and the low groaning sound hovering forth.  There was absolutely no response by the four geese, just an erect stance.  The pair of geese from this point on, walked away from the four, heads lowered and groaning.
I wondered if the two were defending their pond territory since I have noticed a pair of geese that stick around all the time.  Or perhaps the pair was submitting to the four in a pecking order of some kind?  I didn't watch for long, but I noticed the pair swimming on the pond later this evening.  They were the only geese around.  I'm not sure how everything was  resolved, but I *think* the pair  remaining tonight may have been the same couple who were bowing and moaning.  Other geese and a variety of ducks come and go from time to time, but one pair of geese stays.  It'll be interesting to see if they choose to nest nearby. 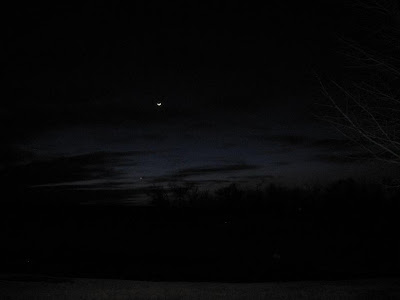 click picture to enlarge
I see the moon,
and the moon sees me....
The moon looks like a sail boat
ready to embark into the dark sea of night.
More about the week's night sky here.
Posted by Gumbo Lily at 7:58 PM