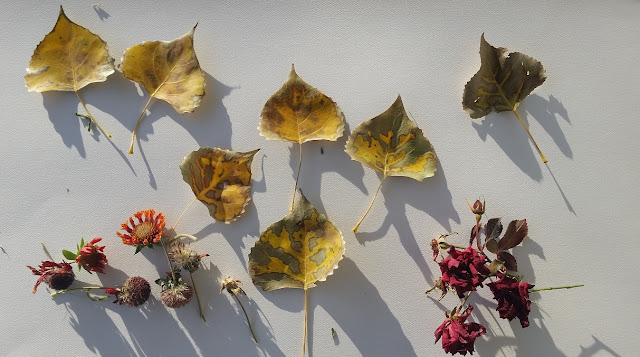 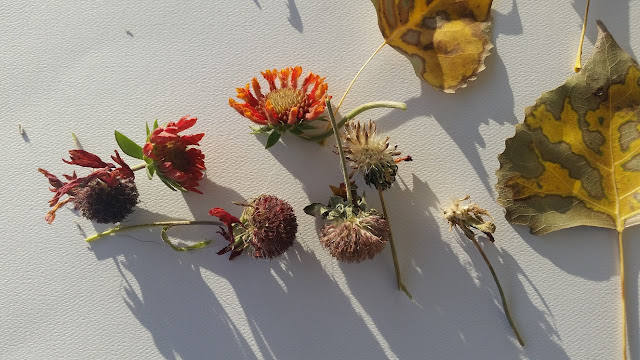 While I was out looking around in my yard, I found several things that I thought were especially beautiful.  First, the roses.  As you might remember, we had an early snow this month.  Everything froze.  But right after it, we had some unusually warm days that dried things and the leaves all fell off the trees.  The roses were blooming and I think they were freeze-dried.  I brought a few in to admire.

You can see life stages in the Gallardia flowers.  Right now there are a few new blooms (what amazing flowers!) whilst others are in stages of dried petals, seed heads, and seeds blown away.  I chose to put my subjects on top of a large, white watercolor paper as a neutral background for my study.  Since I took the pictures outdoors in the afternoon, you can also see the study in fall shadows on the paper!

The Cottonwood leaves are especially unusual to me this fall. Generally, they turn yellow and fall from the trees, but my hunch is that they were yet green or turning while on the trees and then were frozen at whatever stage of turning they were in.  They have the most intriguing patterns.  I brought several in to lay around on tables and shelves to appreciate. 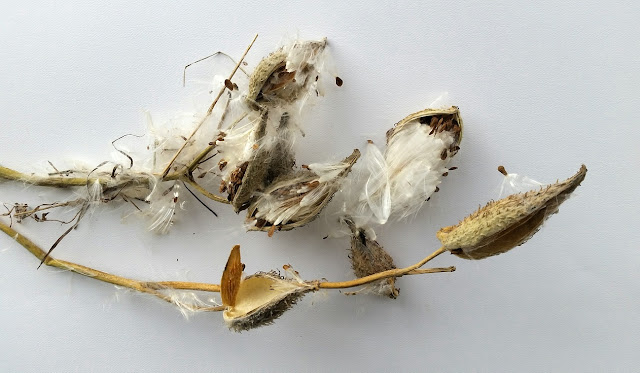 There are so many beauties outdoors just now.  The milkweed pods have opened and their silky fur with chocolate brown seeds attached are just fascinating to look at and touch.  The seeds will gently float on the wind to their next destinations.

It is mostly silent outdoors now.  Most birds have migrated except for the year-rounders that stay with us.   The "beep beep" of the nuthatch tickles me, and the "see me?" of the American goldfinch does too.  Last night while shutting the chickens in, I heard two Great-horned owls hooting back and forth to each other.  Nature is quieting itself and settling itself for winter.  I'm going to appreciate these fall days as long as they remain.

Hubby and I took a little get-away to the Black Hills.  It happened to be during the snowy season of October.  This was the most beautiful drive we've taken in a long time.  It was so peaceful, away from busy tourists that are usually here.

What are you noticing now? 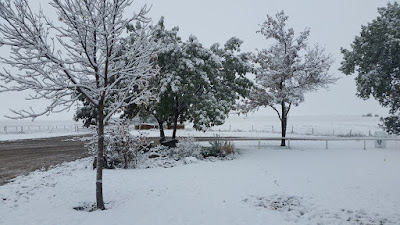 The first snow fell last night and part of today.  We measured about 2" of snow on the ground with lots of wetness below it.  Our rain gauge measured about .7" of moisture.  By evening the snow was melted off, but the skies continued to be gray and blustery, dropping rain and sometimes snow.  When it gets around freezing tonight, we may wake up to another snow like the one in the picture.  This is a good, wet kind of snow-rain mix that puts all of the trees and grasses to bed for winter with a good drink so roots can freeze.  We still have leaves on many of the trees so they are really weighed down with snow. 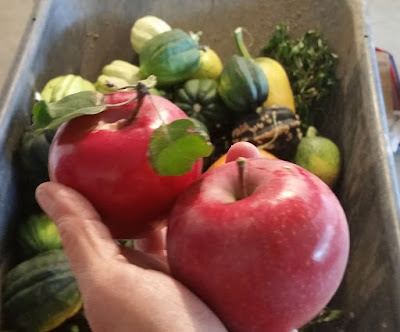 My garden is all cleared off now.  My daughter-in-law and the grands helped me dig potatoes and we split them up between the kids and their families.  The potato patch was a group effort this year with both DILs and grands helping to plant, and the men (bless their hearts) brought us straw to cover the patch.  We weighed about 130 pounds of potatoes harvested and we only planted 12-13 pounds of potatoes cut up for seed.  I also dug up all the carrots and have three full grocery bags in my spare fridge.  I cut several grocery bags of late lettuce that I am so thankful for.  I have a wheel barrow of acorn squash in the garage along with a bushel basket of beautiful, perfectly ripe, hole-free, bug-free, red apples.  The apple tree is a "Northern Lights" which is a cross between a Haralson and a Macintosh and it is very cold hardy.  The apples have a pinky-white flesh, are sweet and delicious to eat, and they make a wonderful pie.  I'd say the gardens were very productive this year, minus the tomato failure.  But hey, that's the way gardening is.  We are expecting more freezing cold temperatures tonight and chances of more snow.  The fall moisture is a good thing for us, even if it does come in the form of wet snow.  There are some warmer days on the horizon!

Has the fall turned cold and wet where you are?  Happy October everyone.