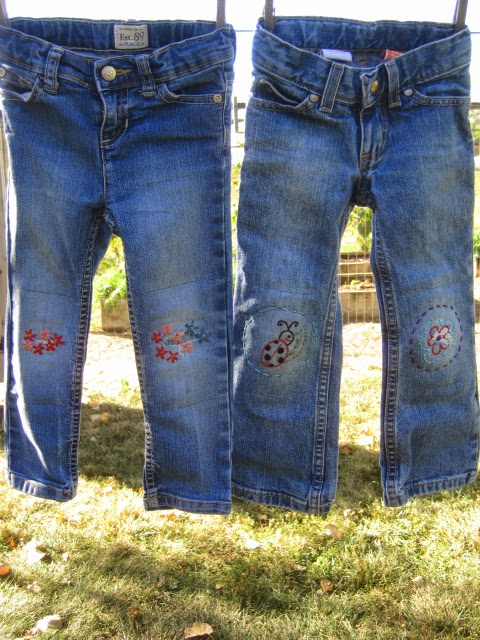 I am having too much fun!
Seriously. 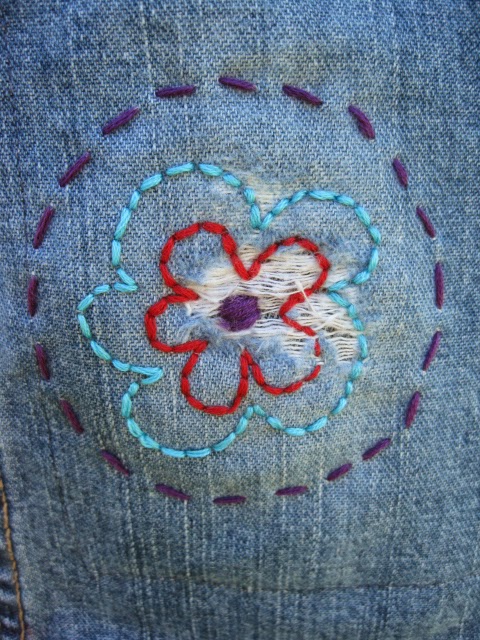 I love denim.
And I have always been a mender of jeans.
Lots of jeans.
Living with five kids and working
on a ranch
along with a husband who works hard,
jeans ripped
and tore
and wore out.
I have mended innumerable jeans
(meaning I have never numbered them and wish I had). 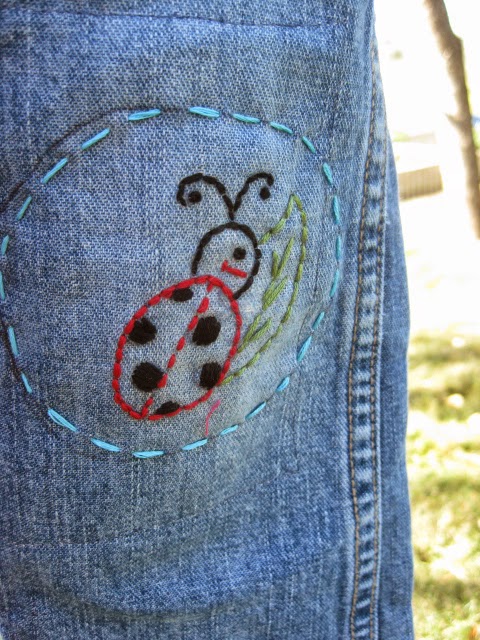 When I was in seventh grade,
I started embroidering...
on my jeans.
I drew on my jeans with a ballpoint pen during class
and went home and embroidered them at night.
I wish I still had those jeans. 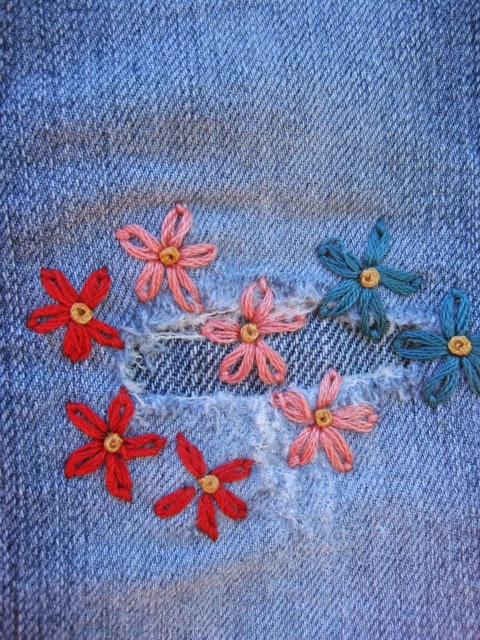 Now I feel like I'm re-living seventh grade.
OnlyDaughter brought me four pair of li'l girl jeans
to mend.
And this is what I have been doing in my spare time.
Love it! 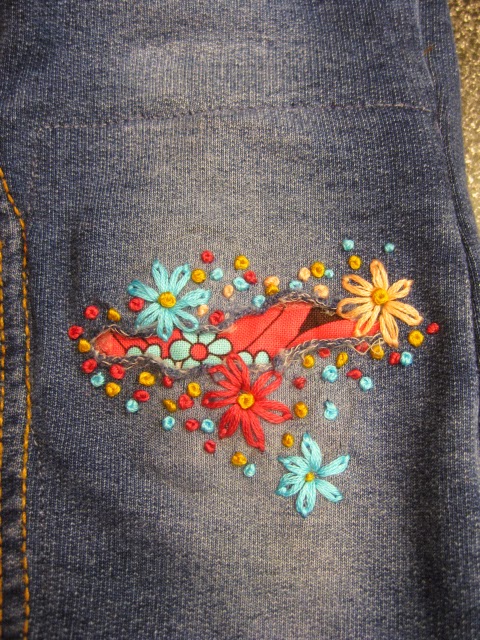 Soon I will go next door and grab the other little jeans
that belong to more of my little people
and stitch on them too. 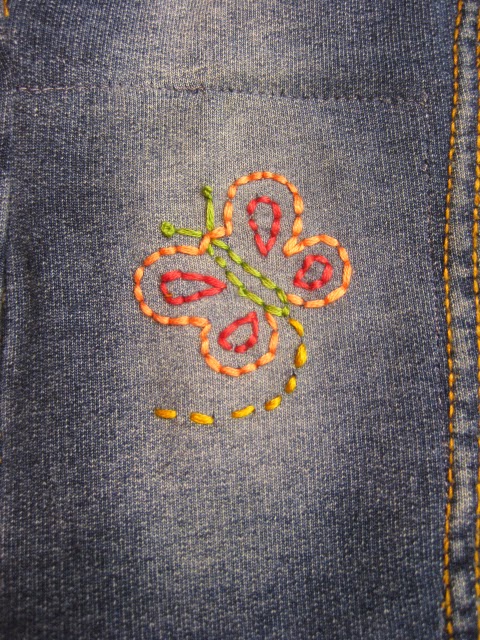 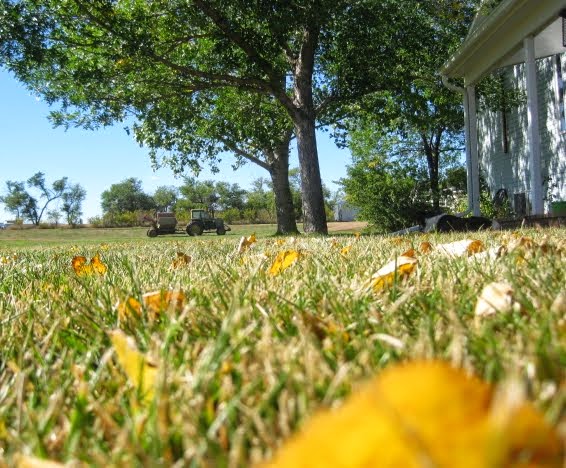 Remember that cold week I told you about?  The one where the low temperatures were hovering around 22 degrees?  Yeah, that one.  Well, it's long past and now it's on to Indian Summer, just what I wanted.  Cool mornings, warm, sunny afternoons, and cool, crisp nights.  It's good weather for me, and it's good weather for leaf-turning.  The poplar tree in the yard is releasing its golden leaves while most of the other trees are just beginning to turn.  Gold is the prominent color here except for some rich red Halogeton which grows in the alkali flats in some of our pastures.  It's pretty to look at, but poisonous to livestock. 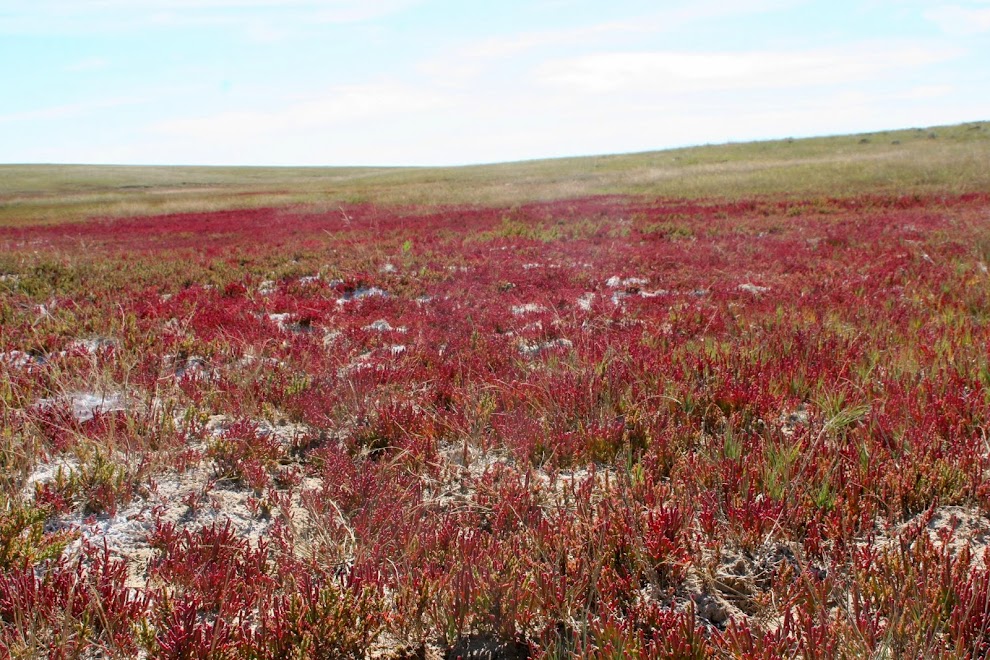 I've been doing lots of things lately.  I took a hike with my son, GentleSasquatch, in Spearfish  Canyon where we went to Community Caves and then to 420 Cave.  (Here's a link to his blog.) Both were steep climbs with high look-outs amidst sandstone rock caves.  It was great fun.  I so loved the varied mountain plants and awe-full views from rock cliffs.  I kept wanting Sasquatch to take pictures, but we both knew they would never turn out just like we saw them with our own two eyes.  S. made the comment:  "The best cameras in the world cannot see like the human eye.  They only wish they could capture what we see."  True.  He does have some nifty fotos on his blog of the views from 420 Cave if you care to take a look.  Here's us (duo-selfie). 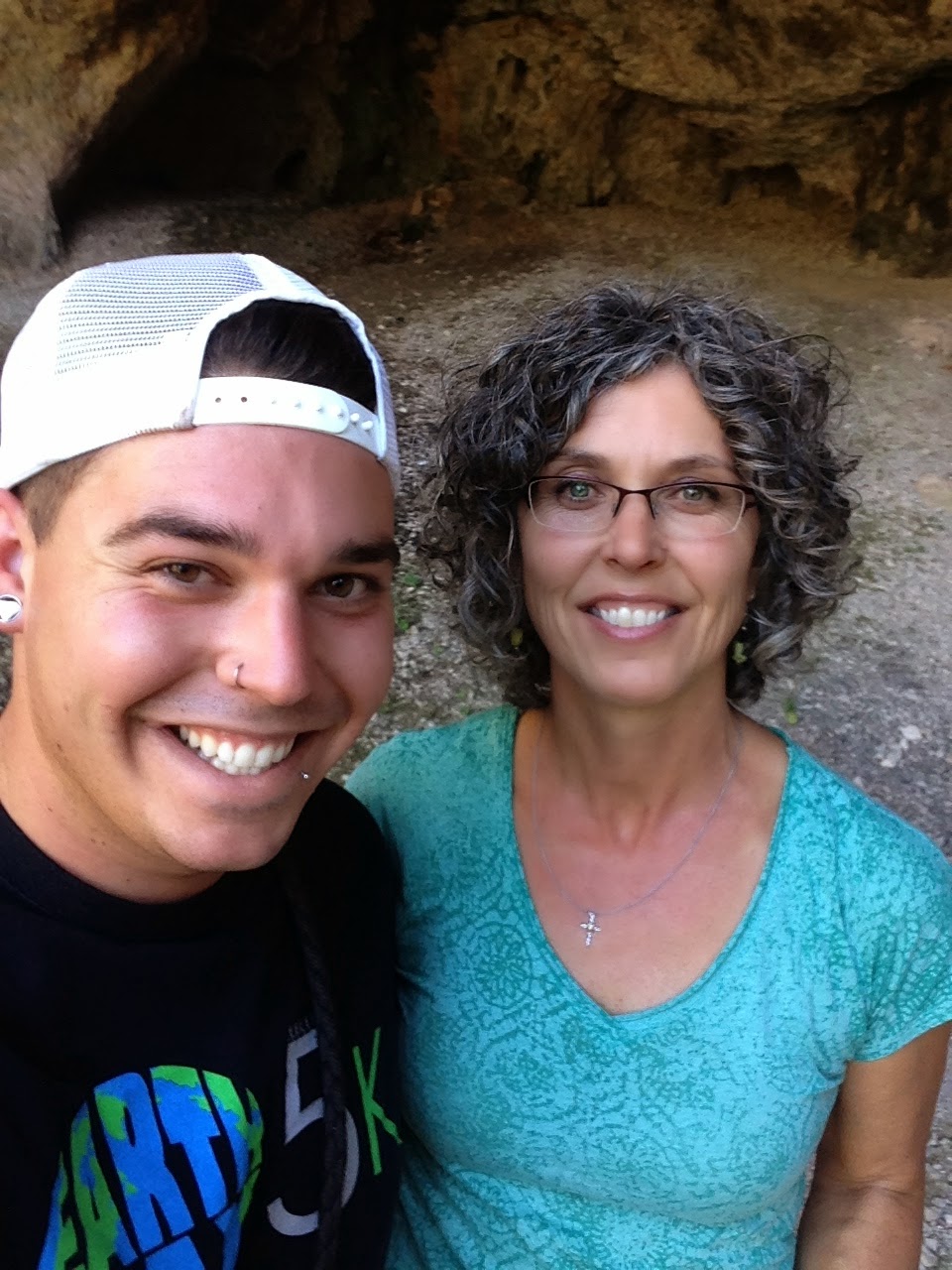 I finished up two batches of Zucchini Salsa.  O man!  It was good stuff!  The only tweak I made to the first batch was to add five jalapenos to the recipe for a little extra heat.  The second batch I added more jalapenos for more heat.  The recipe was one of the very best canned recipes I've made.  The taste and texture is a lot like Pace Picante sauce.  Click here for the dandy recipe.

Our local sweet corn grower is calling it quits for the season today.  JJo and I went a couple days ago to fetch several dozen ears of that delicious sweet corn to freeze.  She processed six dozen and I did ten.  By the end of the day, I had 44 pints of delicious corn-off-the-cob for my freezer stash, much more than Hubs and I need, but we can always share it with our kids and guests.

I think I'm done canning except for applesauce.  My dad's apple trees are bursting with beautiful apples so I intend to get some homegrown sauce made and maybe a little apple butter too.  Dad has an apple press; I'm hoping to help him press some fresh apple juice.  Yum!

Our basement, which had the sewer backup problem, is now fixed.  It feels like a totally new place, even though all that was done was drywall repair, texture, and paint, and a new carpet laid in the bedroom and living room, hall, and stairs.  Oh, it's so nice.  All I have left is to finish painting the closet doors and set up the bedroom again.  I'm so blessed to have CarpetnerSon here to fix things up for me.

Now the men are on to a new project -- building a shop that looks like an old barn.  I'm so excited.  CarpenterSon really needed his own space to do his thing and so the men decided to go ahead and build it while we've still got the good weather to get it up.  So far they have the cement poured and the rafters built.  Next the walls will go up and the rafters too.  They'll try to enclose it before wet weather comes our way.

I think that's all that is on my mind for now.  One more thing that I've been thinking about, actually.  From My Utmost for His Highest today, excerpts:

Show to the other man what God has shown to you; and God will give you ample opportunities in actual life.  To be a disciple means that we deliberately identify ourselves with God's interests in other people.  "That you love one another as I have loved you." God's life in us expresses itself as God's life, not as human life trying to be godly.

What are you up to these days? 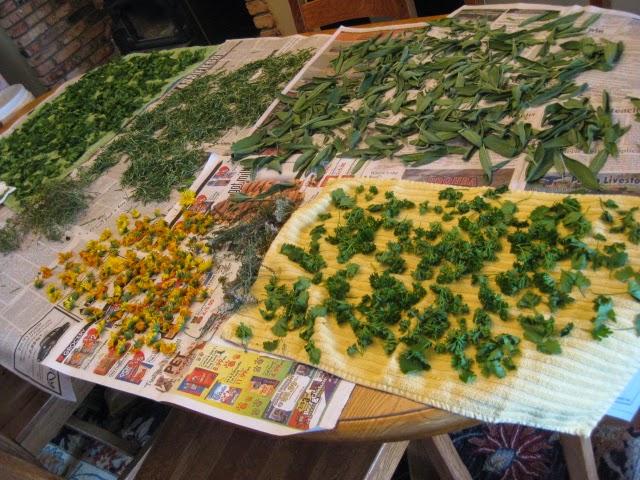 The cold air descended upon us and thus the garden had to be harvested in a hurry.  I plucked nearly all the herbs:  flat leaf parsley and curly parsley, sage, rosemary, thyme and the caldendula flowers that I use in my salves.  I picked all the lettuces and a few tomatoes that had turned orange, the pumpkins were brought into the garage and part of the garden I covered with a tarp, hoping to selvage what I could after the freezing temps of the night.  The root veggies would be safe underground.

This morning we awoke to just 22* so I was quite sure the garden would be totaled.  Even the covered tomatoes and peppers were wilted from frost.  Some of the herbs took it well though.  Probably because they were clipped short.  I'm not sure.

I'm thankful that I always have those lovely root veggies to keep my gardening going even if it frosts a few times.  The carrots and spuds can take it and I like to keep them underground until the earth starts getting cold and freezing.  I feel like I'm still gardening, but not doing a whole lot.

I began drying my herbs.  I start by trimming off all the stems and letting the leaves dry on newspapers and towels.  I prefer this method to hanging little bunches all over. It always seems so messy to me to strip dried leaves off stems and have everything in a crumbly heap.  I prefer the whole leaves in tact.  The process of drying herbs got me to thinking more about herb teas, herbal oil infusions and all that good stuff, which reminds me that I still have some lovely peppermint and spearmint to gather in.  I forgot about them, but they seemed to fare the frost just fine.  One of the good, herby things that I decided to try for the first time is Fire Cider.  It's a concoction of everything hot:  onions, garlic, peppers, horseradish, peppercorns (among other additions) all covered up with apple cider vinegar.  It is left in a quart jar for 4-6 weeks with a daily shake to help move the good things around to infuse the vinegar.  The concoction is then strained and honey is added to taste.  It can be used as a tonic for the immune system or as a warmer-upper or as a tonic for colds and flu.  I'm thinking it would make a good hot toddy for cold nights.  If you're interested in Fire Cider, click here for a recipe and for a good video by Rosemary Gladstar who is an herbalist who I think is so interesting to listen to.  She explains the goodness behind Fire Cider. 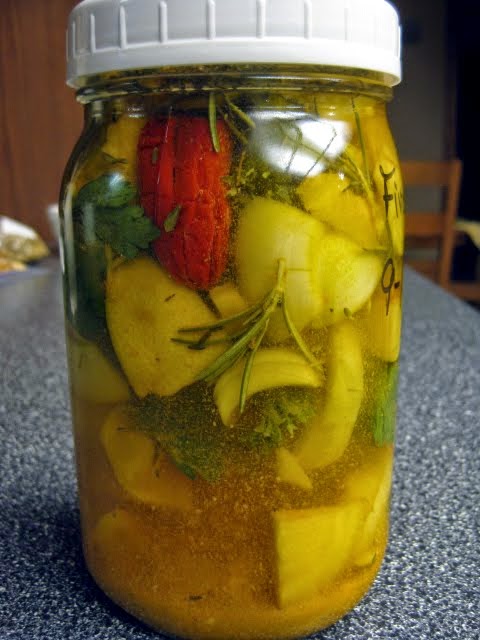 Along with the cold temperature, rain, sleet, and snow came huge flocks of birds into our front yard.  This is not the prettiest picture of our yard, but I wanted you to see how very many birds we had.  These were mainly yellow-headed blackbirds and their young.  Incredible gaggle of noisy ornithological specimens! 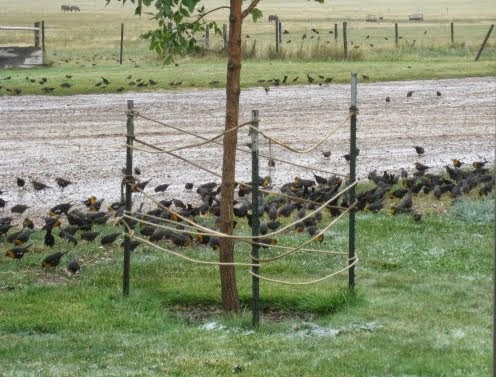 There are other birds that I've been noticing these past couple days especially.  I've seen catbirds, several vireos, and warblers which do stay for the summer, but seem especially prevalent now.  The Sandhill Cranes are flying over and sometimes roost in the big cottonwoods by our pond.  When we moved cows the other day, there were swarms of swallows swooping, diving, and catching the little white moths that the cows were kicking up as they walked.  All manner of birds are flocking up, and that usually means their migration is at hand.  I'm just enjoying the days as they come and trying not to be sad about their leaving us again.  Instead, I'm looking for the chickadees which sometimes come and stay through the winter months, and there are always the nuthatches and woodpeckers that keep my spirits high.  I am also anticipating the hoo-hoo-hooing of the owls soon and look forward to taking the littles out owling!

Tomorrow will be a warmer day and I hope to continue clearing the old, frozen vines off the garden and pull up the dead bean plants and such.  It'll be good to clean things up and put a few things away into the garage for next year.  The three neighbor-grands will be over for the day and we will surely enjoy a fall-ish day together outdoors.  There are already a few golden leaves falling from the trees.  We might make a chai tea in the afternoon and have a cookie.  Sounds good, doesn't it?  I hope all is well with you.  Thanks for stopping by.
Posted by Gumbo Lily at 8:16 PM 11 comments: