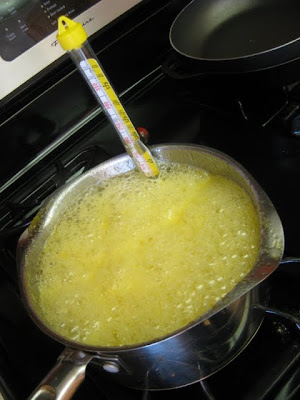 I had a few oranges that needed to be used up, so I thought of orange marmalade.  We haven't had that in a couple years so yesterday I began to boil the oranges and lemons and let them rest overnight in their juices  for 12-18 hours.   Then this afternoon I finished it off by adding sugar and boiling it until it jelled.  Do you like orange marmalade?  Either you like that bitter-sweet taste or you don't.
Orange Marmalade
~from The Joy of Cooking
2-3  large oranges
2-3 small lemons
Scrub well and cut into quarters and remove seeds.
Add and simmer for 5 minutes in...
3 c. water
Let stand and cover for 12-18 hrs in a cool place.  Remove fruit and cut into very small shreds.  (I removed the peel here and just added a little zest from the peel instead of leaving in all the peels)  Return to the water in which it was soaked.  Boil 1 hour.  Add for each cup of fruit mixture:
1 c. sugar
Boil the marmalade until the juice forms a jelly when tested (temp reaches about 222 or 224* F).
Pour into clean, hot jars and seal.
Makes about 3-4 half pint jars. 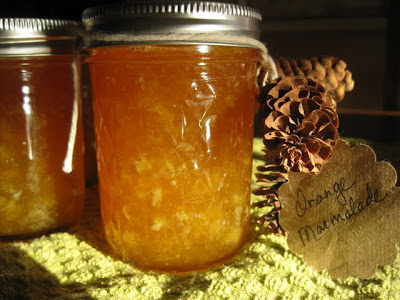 A couple jars for us and a couple to give.
Posted by Gumbo Lily at 2:48 PM