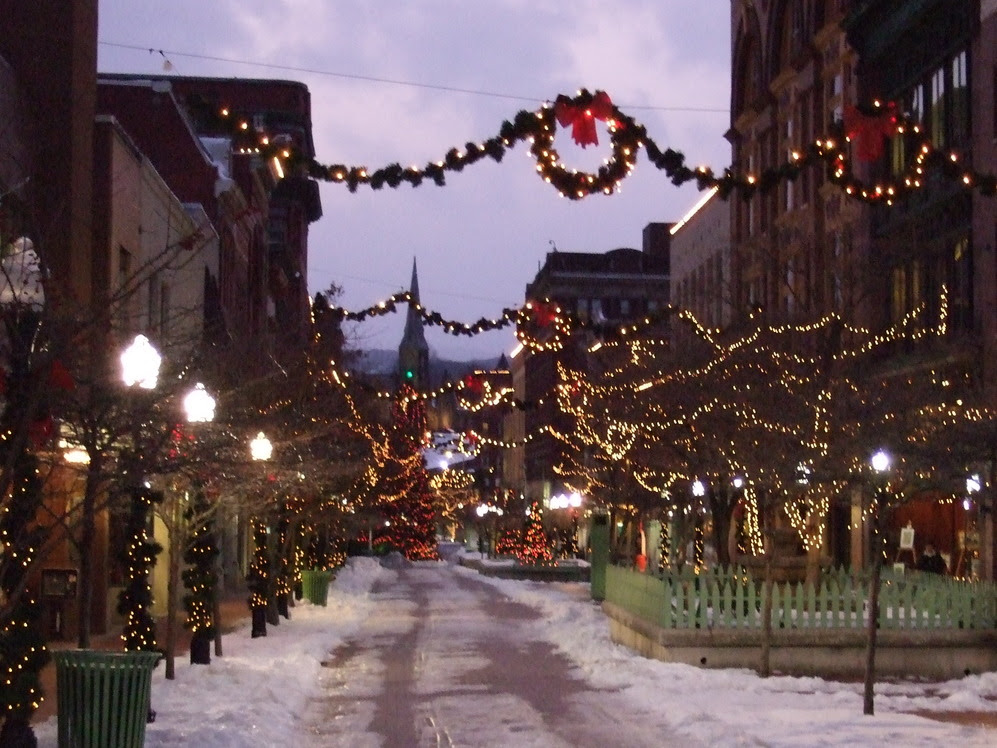 A photo that reminds me of my hometown's Christmas lights from childhood
Cumberland, MD
Way back when I was a young girl, Christmas lights were a fascination.  I remember our little town's downtown being beautifully decorated and lit up for Christmas.  There were lines that crossed over our main street -- which was really called State Street --  on which garlands were draped along with jumbo red lights and wreaths.  There was a giant sized Christmas tree at the end of Main Street near the town hall  which was trimmed out with multicolored big-bulb lights, and was decorated by the Girl Scouts and Boy Scouts who sprinkled tinsel, strung garland and added a few handmade ornaments on the very bottom branches as far up as they could reach.   Every store owner had worked hard to display their most desirable merchandise, decking store front windows with Christmas lights and aluminum Christmas trees to coax the shoppers in the door.  There were loud speakers croaking out Christmas music to the street below.  As a child, I thought it was simply magical to be out shopping downtown with snow falling, people bustling, and Bing Crosby singing Silver Bells all the while.

During the Christmas season Mom always pressed Dad into taking the family for a drive around town to see the Christmas lights.  There was one house, I especially recall -- the Higashi's -- who always had a holiday theme.  One year they had a Holiday Train in their front yard and the lights on the wheels spun around like it was moving and there were cartoon people and toys bobbing up and down, waving from the train cars.  Santa was always perched at the chimney, all lit up with a spotlight and waving at us as we drove by.  Mr. Higashi must have loved planning his yearly Christmas light show anticipating  all the townsfolk driving by night after night.  Most people lit the traditional Christmas evergreen trees and some trimmed their windows and the peaks of their houses all in lights.  No matter what was lit up, as a child, I was in awe and overjoyed by it all.

This year as Hubby and I were cruising a few streets looking at the lights, I promised him that I wouldn't make fun of all the inflated Santas and Rudolphs or the overdone house trimmings.  As a grownup now, I've turned into a bit of a minimalist when it comes to Christmas lighting so I sometimes get overwhelmed by seeing a fully-lit, moving carousel in someone's front yard.  I did hollered out, "Holy Inflatables!" when I saw a bigger-than-life-sized inflated Santa and Frosty the Snowman on 5th Avenue, but I am trying, really trying to see the lights and the decorating as I did when I was eight.  It's more fun appreciating the efforts that some have made to light up the world with Christmas Joy than it is to be a critic.

So today, I wish for you the ability to see things through the eyes of a child, to let the Christmas lights thrill you and remind you that during this special season, all the world adds an extra light, a candle, a string of lights or an inflatable Frosty to bring a smile to a dark world.  Take Joy!

Oh, one more thing....do you know the book called Take Joy by Tasha Tudor?  It's an old book full of timeless stories, poems and songs, along with Tasha Tudor drawings, all about Christmas. Your library may have it.  If you get a chance, read it to your children or to your grandchildren or read it for yourself.  Lovely.