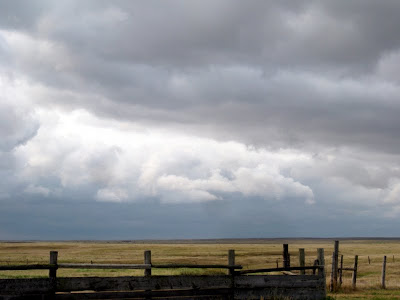 I've been thinking a lot about the wind lately.  When you live on the prairie, you do that.  There's so little that stands in the way of the wind that one has to take account of it every single day.  So many, many things depend on the wind and the direction it's coming from.  It was said that when we had a strong east wind, it meant that there was a storm on the way, but this year that old belief has come to naught.   There was hardly a storm at all no matter the wind direction, and we didn't lack for wind.

Wind is what took a lightning strike in our north pasture and blew it up into a prairie fire that blazed for seven miles.  Neighbors from upwind and downwind where there ready to take action.  Thankfully, we did get a rain that day that took the fire down almost entirely.

There was a wind storm that blew over us a week or so after the fire happened, and it was such a gift.  As we watched dust and tree limbs blowing, we saw something else which looked like another fire had started.  It looked a lot like smoke, but what was blowing in the wind was soot from the fire.  All that smelly, dirty, oily stuff blew from the pastures to Who Knows Where, and gave us a cleaner place to start fencing on this summer.  The men were dreading going out there to repair and rebuild fence, but now the range is sort of clean and it's even sprouting some green grass.

When you live on a ranch and you're out looking for livestock, it is most likely that you will find them upwind on a hot summer day.  Sheep and cattle prefer to walk into the wind to stay cool rather than walking with the wind.  Sheep also prefer to sleep on the highest places as a means of protection to the herd so they can catch the scent of predators in the wind and so they see everything below them. Aren't they smart?  It is said that livestock can smell water so wind again is important when taking young livestock to new pastures, however we always take them to water so they can figure it out a little better.

We plant shelter belts to protect our homes and buildings from wind and to protect livestock from high winds and snow.  The trees provide shelter against the prevailing northwest winds, but can also protect from easterly winds depending on which side of the trees you are. 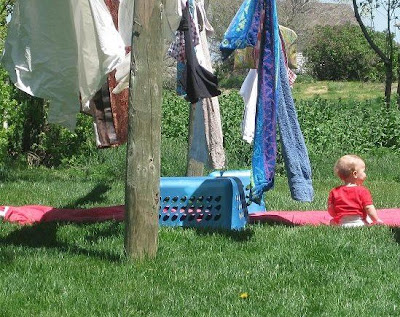 Closer to home, I am constantly checking the wind when I hang out the laundry.  A few days ago, NumberOneSon shot a skunk just north of our house, and even though he took it away, the odor lingered enough that I hesitated to hang my clothes on the line.  I waited until the wind switched from the north to the west and managed to keep the stink off the fresh, clean clothes.  I also take note of the wind direction when deciding which line I will begin hanging the clothes from first; I always want to pin clothes to the downwind line so I'm don't have clothes flapping me in the face when I pin them up.  The same rules apply when I take the laundry down. I try not to hang clothes out when I know the men are going to be driving on the road next to the house because of the dust. I really don't have set rules about hanging clothes, but it's something that just comes naturally when a girl's got to battle the wind all the time.

The mailbox is another place where a prairie savage like me has to consider the wind.  When I set letters in the box to be mailed, I have to think about our mailman opening the box and the wind whipping inside there.  Most of the time before I ever put the flag up, I set a rock on the mail because so often when you open a mail box that is located on a hill, the wind will catch the letters and bills and it'll fly right out of there!  I've chased a few pieces of mail down and it's a challenge.  I wonder if my mailman is glad that I keep a rock in the mailbox?

In the fall when the leaves are coming off the trees and it looks like a dump truck just tipped a one ton load of leaves in my yard, I don't worry too much about raking because I know sooner or later the wind will whisk them away!  Wintertime we really have to pay attention to winds.  Winds with cold and snow can freeze up water tanks and can send livestock drifting with the winds.


Last week we pregnancy tested 199 heifers.  I wanted a record of it here in my journal.  It really doesn't have anything to do with the wind because we always work livestock in the barn.  But then again, it does.  We set up the corrals and barn that way so we don't have to always fight the wind, rain, snow and sun whenever we have to pregnancy test or brand or weigh bulls or any number of things.  Our lives really are built so much around the weather. 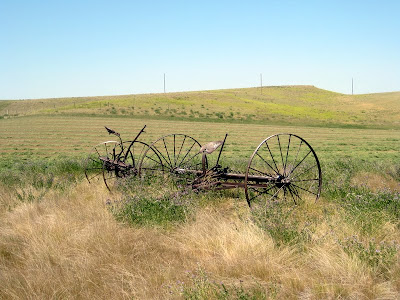 Adversity is like a strong wind. It tears away from us all but the things that cannot be torn, so that we see ourselves as we really are.   ~Arthur Golden