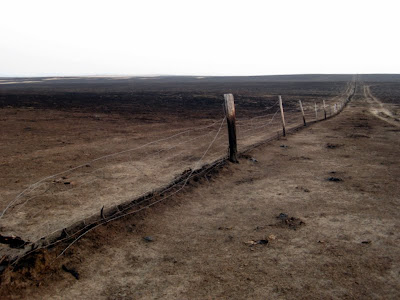 What we fear when a storm cloud appears, happened yesterday.  Lightning was flashing from dry clouds and hit several times on our range.  The guys noticed the smoke which seemed small at the time but as they approached, the high winds fanned the flames and in no time it was a raging prairie fire.  Within minutes from the time they left the house, I got the word on the two-way radio to call for help. 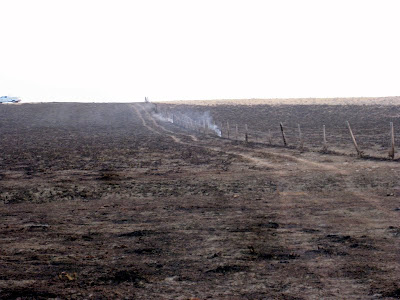 In our country, ranchers are volunteer firefighters too.  We have a community fire department and plenty of good equipment that is placed strategically with ranchers in the area.  At our ranch we have a 300 gallon pumper and a tender truck that holds 1000 gallons of water that is meant to refill sprayers when they are empty but can also be used to fight fire.  At 4:30 yesterday afternoon our men went out with sprayers and started in fighting fire and as the minutes and hours ticked by, one by one, our neighbors showed up with their pumpers and sprayers.  You can't imagine the feeling of seeing help on the way when your ranch is burning -- good neighbors. 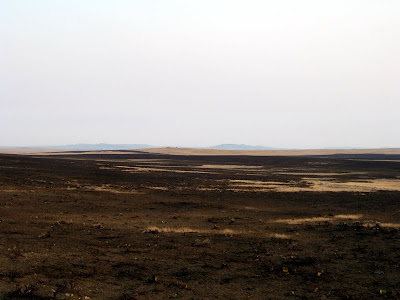 I was driving the Ranger (4WD) out to the fire to get NumberOneSon and he was going to go back to get the tractor to plow a fire line, but by the time I got there they realized there was no way  they were going to get ahead of the fire with a tractor/disc combination so that idea was abandoned.  We've had fire here before, but I have never seen anything like this prairie fire.  The winds were pushing the fire onward and the whole horizon was lit up like an orangey-red sunset, but it was fire.  All I could do was to pray to God for help.

The men sprayed down the edges where they could reach and the fire ran on ahead with the wind through pasture after pasture paying no mind to fences.  I went back to help direct more trucks up to the fire, and as I was taking one rancher up, a big crack of thunder and lightning hit and it began to pour.  Rain!  Blessed rain!  We stopped and radio'd up to the guys and they said they were getting rain too but they weren't sure how long it would last.  We drove up to the corner gate and waited, but it was so muddy we felt it best to wait until they called us up.  It kept raining and all the firefighters came back to the gate and we drove back home.   We were all so thankful.  Hubs said, "There is no way we could have caught that fire.  It would have burned to the highway without the rain." 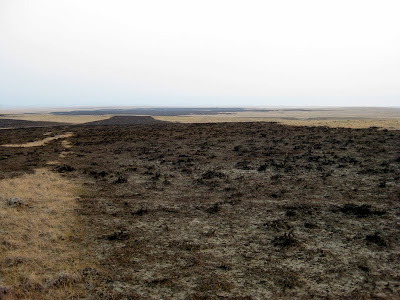 As the men stood around pick-ups discussing what they had just been through, a plane flew over.  It was a fire jumping plane.  Our local fire chief recognized it, and all of them watched the plane circle the fire again and again.  The chief turned his radio back on and he heard them say that the fire had reignited on the north side.  The wind had changed and blew from the east.  Where the rain had not fallen, the fire had re-emerged and  the men hustled back to the line to fight on.  The good thing was that they were present and ready to go. The BLM firefighters showed up and came to sit on the fire site and watch it through the night.  The majority of the land that burned was BLM lease and so they came to help with it and make sure it stayed contained.

This morning Hubs and I went out to look things over in the daylight and to bring hot coffee to those left watching the fire.  Ash, soot and remnants of sagebrush remained along with needle-less cacti and a few sturdy fence posts.  The cows and sheep that were out in the pastures were fine.  They evidently found their way to safety so there was no loss of livestock.  Five trucks and their men stayed on site all day today and left this evening as they felt confident the fire was totally contained.  The state department flew down to measure the area of the fire and their figures were:  1008 acres burned within a 14 mile perimeter.  When we drive out into the pasture now, I think, "This could happen again.  Anywhere, anytime."  On a positive note, with a little rain this fall we hope to see a lovely green pasture come back.  Fire so often improves the land it burns like nothing else can.  This evening I heard on the radio that a prairie wildfire has broken out in Oklahoma.  My heart aches for them.  God, be their help and strength, and please send them rain.
Posted by Gumbo Lily at 9:58 PM