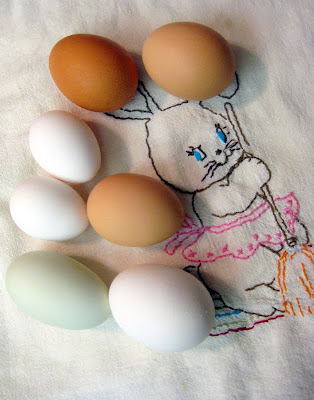 One of the kids embroidered this bunny tea towel for me a long time ago.

It's always exciting to me when the pullets start to lay.  I didn't expect them to start laying until the end of August or first of September, but there were two eggs in the nests today.  See the two little white ones side by side?  It's a wonder the hens lay at all with the critters that have been milling around the coop each evening.  Every night when I go out to shut the door on the coop, I see several skunks or raccoons.  Last night I opened the door to the granary to fetch some laying pellets and there was a thumping and then a raccoon face was peeking out at me from the corn bin.  I shut the door on him and called for Number1Son to bring a gun.  He said there were three coon in there after all. Evidently they are climbing in through the opening on the roof.  I just hope they keep eating corn and don't get a taste for fresh chicken anytime soon.  I've got to be very diligent about shutting the coop door before dark each night or they'll find their way in to the hens next.

August is already whizzing by, isn't it?  This past Monday FourthChild left his job here on the ranch and went back to college where he will be a senior RA for a dorm.  He's helping the staff to get ready for the residents that will be arriving very soon.  He was excited to get going and I was happy for him, but I'll admit, I shed a few tears after he hugged me good bye and drove away.  He's not even very far away from us -- just an hour and a half -- but we've had a fun summer together and now it's all done.  This is likely his last summer at home as he will be graduating in the spring and hopefully he'll find a job.   The BabyoftheFamily has just a few more days before he takes off to Tucson for another year of college there.  He'll spend the weekend with us and then he is away. Back to just the two of us again.  It is as it should be.  I'm glad our kids want to go make their way in the Great Big World, but I can't help missing them a little bit.  I love them after all. 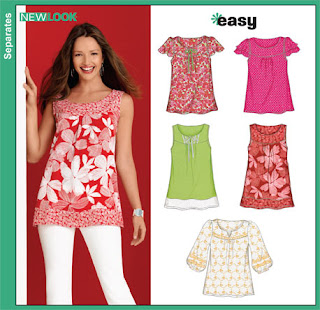 I've been spending some time at the sewing machine these past couple afternoons.  It's been fun.  I made a sun dress for Miss Bee and a top for myself.  It's been a long time since I've sewn clothes for myself, but this was an easy pattern to make.  It's New Look 6871.  No buttons or snaps or zippers.  It turned out cute, but it seems a smidgen wide so I may give it away to OnlyDaughter who is now 20 weeks pregnant.  She might be able to wear it through August and September.  The next time I make this top, I will use a cotton voile so it's a little bit more flowy and light.

We had locally grown corn-on-the-cob tonight.  What a treat!  I made a Zucchini-Parmesan Casserole with zukes and onions from the garden and we cooked burgers on the grill to go along with the corn.  Sometimes we have Just Corn Suppers, but we had the neighbors over and I thought it best to make a full supper.  DIL brought the dessert -- Lava Cake (scrumptch!).  The garden is coming along.  The cucumbers are setting on and I'm picking a ripe tomato every other day or so.  You know how it goes -- pretty soon, all-at-once, everything is ripe and the entire garden needs picking!  I hope you're enjoying what August is bringing you.
Posted by Gumbo Lily at 8:09 PM