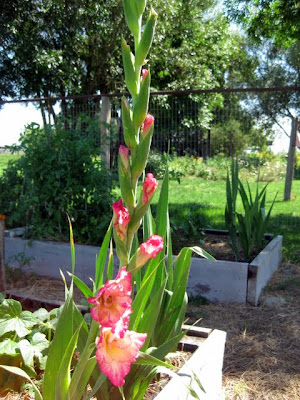 The late bloomers are coming out to play this summer.  I 'm always bothered by people who think that late blooming children are "slow."  But no, they aren't.  They bloom when they are designed to bloom just like my gladiolas.  This is the first glad to blossom and I have several more to go.  They are so cheery in the veggie patch.  My mother-in-law always planted a row of gladiolas in her veggie garden, and I sometimes plant them in my veggie patch in her memory. Gladiolas remind me of her. 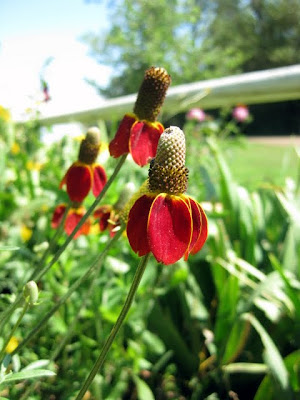 The coneflowers, sometimes called Mexican hat flowers, are very abundant just now.  I especially like the red and yellow ones. 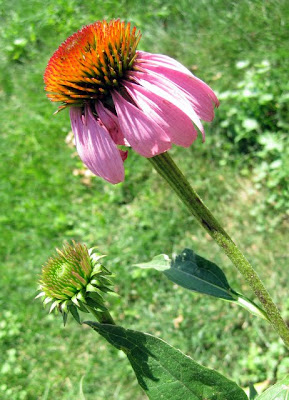 Then there is the purple prairie coneflower, also called Echinacea, which is just beginning to bloom in my garden. I like how the center of it starts out spikey and orange.  Who would have thought to put purple and orange together? 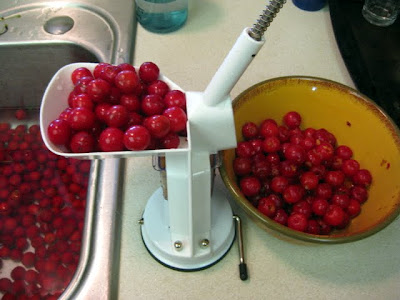 Friends --very nice friends--offered to let me pick their cherry tree last Sunday, but instead, I "picked up" the cherries that they had already picked for me.  (See, I told you they were nice)  They gave me five gallons of sour red cherries.  Aren't they just beautiful?  They also loaned me their cherry pitter.  Oh my, what a nice device!  It's every bit as good as my apple peeler/slicer/corer which I adore.  My friend said that the cherry pitter is worth as much as a husband.....in help, that is. I am definitely ordering one of these for myself. Find it here. 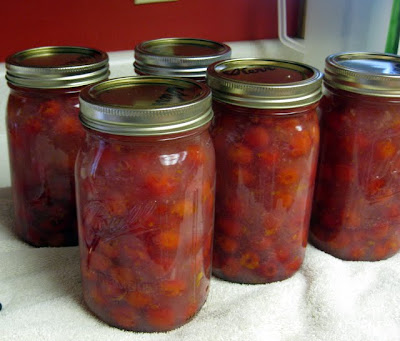 I made six quarts of cherry pie filling and then froze the rest of the cherries in quart sized bags.  I turned out a cherry pie that was deeeeee lish eous!

The Fourth-born, S., had his tonsils and adenoids removed on Wednesday.  Things have sure changed since 20 years ago when our First-born went in for his tonsillectomy.  The tonsillectomy was a whopping 15 minute procedure.  Within two hours after the surgery, we were gathering up our stuff to drive home.   Many say that having tonsils removed as an adult is much harder to bear than it is for young kids, but our 21 year old is doing just fine -- eating lots of ice cream, drinking cold drinks and eating fairly well for a guy with a major sore throat.  (Pain meds sure do help.)  We had smashed potatoes and hamburger gravy for supper and he did quite well eating it.  He even tried a little popcorn this evening.  His doctor said he could eat whatever he felt like eating.  So far, so good. 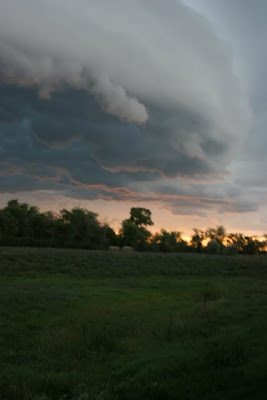 The adjusters came to look at our homes and buildings here on the ranch and decided we had more loss from the hail storm than we thought at first.  The roofs will need to be replaced among other things.  Sounds like  lots of work to me.  We had another big cloud come through tonight and the weather folks said we were going to get another round of hail, but no.  I'm sure glad it was nothing but wind and a little rain.  It likely hailed on someone out there.
Summer sure seems to be flying by, doesn't it?  I hope you are enjoying every minute of it.
Posted by Gumbo Lily at 9:42 PM