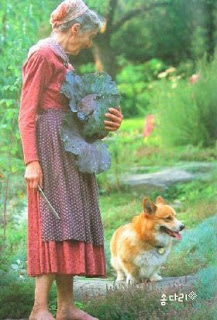 Tasha loved her Corgi dogs.
I love my Border Collies -- Jessie and Sue. 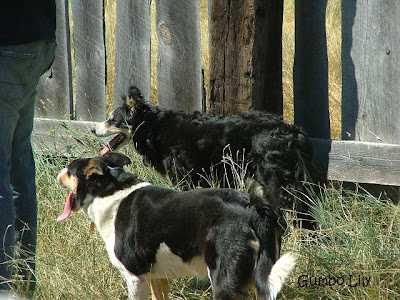 Jessie (the mom) in back and Sue (her daughter) in front. 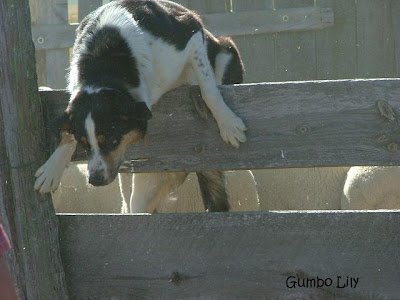 Sue jumps over the fence to get to her next job. 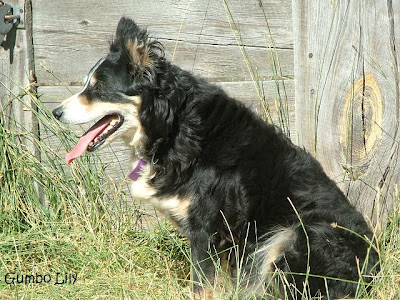 Jessie watches the sheep to make sure they go through the gate. Our dogs helped us work sheep today and they LOVE their job! 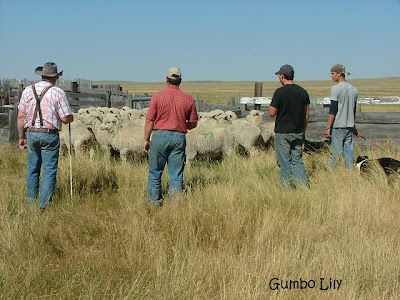 Tasha was no stranger to hard work and she did it heartily with her family. We work together as a family too. Here's Grampa, Dad, and two sons. I helped too, but spent a little time behind the camera. 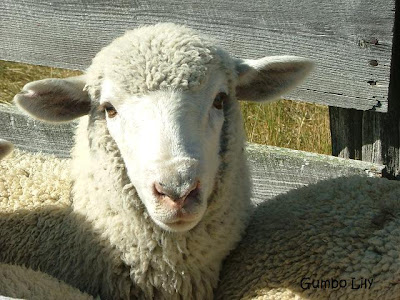 What does working sheep mean? It depends on the season, but today we sorted the ewes away from their lambs to wean them. We then sorted the ewe lambs from the wether lambs (male sheep made into "steers") and marked the wethers with a dob of paint so they'll be easier to distinguish when sorting down a sheep alley when we're ready to sell them. The mother ewes were bagged and mouthed. That means that Third Son checked every ewe's bag (udder) to see if there were any problems, and then he opened their lips to see if their teeth were good. Sheep with bad teeth don't fare well on the prairie and are therefore culled and sold from the flock. Any ewe that has a a varied paint mark on her back is likely a Crazy Old Girl that will also be culled and sold. She's marked for a reason. After all of this, we sprayed the flock with an insecticide to ward off disease. There is a disease that sheep can contract called Blue Tongue. Wildlife like deer and antelope first get sick and die from this disease and then it is passed on to other similar animals -- domestic livestock like sheep and goats via flies. We've been noticing that some of the antelope are dying out on the prairie which is a warning sign that we need to spray our flock to keep the diseases at bay. It doesn't guarantee protection, but it helps. 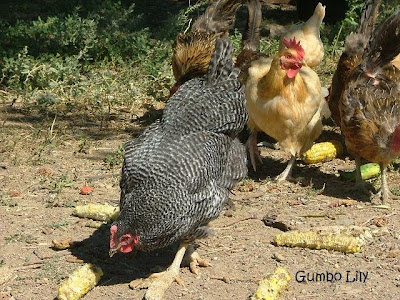 Tasha raised chickens and called them by name.
My chickens, pictured above, are enjoying the left-overs from our corn freezing marathon. I call some of them by name.... Henny Penny, Little Black Hen, Goldie, to name a few.


"The young couple (Tasha and her husband) aquired a decrepit but beautiful seventeen-room farmhouse in Webster, NH. Here, Tasha continued her career in earnest and raised four children without benefit of plumbing or electricity until the youngest was five, while somehow finding the time to make the house livable, milk a cow, care for a lively collection of chickens, geese, sheep, and pigs, and tend her vegetable and flower gardens. Once again, Tasha thrived on difficulty and hard work, but her husband did not, and the couple, like her parents, eventually divorced. As a single parent, she worked with even more determination to "keep the wolf from the door," through sales of her illustrations, portrait commissions, and by performing marionette shows with the help of her two sons and daughters. Once her family was grown, and with the proceeds from the success of Corgiville Fair, Tasha purchased a plot of abandoned farmland across the Connecticut River in Vermont. Her older son, Seth, built the house and barns according to her plans and work began immediately on the walls for the gardens and the planting of flowering crab apples, pears, and apples in the orchard. Now, after twenty years of Vermont weather, the buildings have mellowed sufficiently to trick any visitor into assuming they are from another time, and the gardens have reached magnificent maturity. And Tasha, living in the surroundings she has always wanted, continues to work from dawn to dusk, gardening, milking her goats, spinning and weaving, and above all, painting."

~Introduction to The Private World of Tasha Tudor
Posted by Gumbo Lily at 4:54 PM