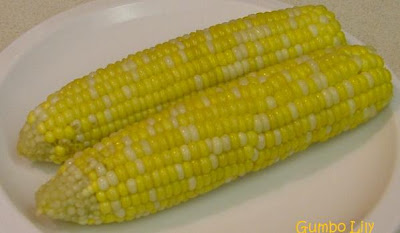 How about 30 dozen ears of corn? We've got corn!
A friend called me yesterday, "Hey Jody, do you want some corn?"
Now here in farm/ranch country that is a loaded question and you best be careful before you answer.

1. I have 5 dozen tough old ears of field corn for ya.

2. I bit off more than I can chew -- would you take the rest of this 5-day-old corn that I can't finish canning?

3. The birds pecked the tops out of the sweet corn we picked and we can't sell it. Would you be interested in 30 dozen ears -- FREE?

If you chose number 3, that was the correct meaning of the question, "Do you want some corn?"
I hemmed and hawed about what answer to give. I really wanted to freeze some corn, but 30 dozen? I'd have to get back to her. As it turned out, my folks were out for a couple days and my dad was helping the guys haul hay in from the hayfield. Gramma said, "Let's do it!" So I called my friend back and said we'd take it.

Thankfully, the men took an extra-long noon hour and shucked all the corn for us and put it in coolers and clothes baskets. We took the raw corn and cut it off the cob using an angel food pan for a cob holder. You stick the pointy end of the corn in the middle, hold the top and cut off the corn. If you have an electric knife, it works even better, but we had some good serrated bread knives that worked slick! After we cut off all that corn, we began to boil it in batches. Here's my Grandma Kathryn's recipe that we used.

Mix this all in a large pot and bring to a boil. Boil for 5 minutes. Cool. Measure corn (with juice) into freezer containers or freezer bags. Freeze.

By the end of the day, we had 46-1/2 quarts (can't forget that little 2 cup bagful) of corn; 50 some flies on the ceiling; a quart of corn juice smeared on the floor, table, and chairs; 10 dish towels, two dish rags and 6 hot pads ready for the washer; and two tired women ready to sit down and rest AFTER the supper was made for the hungry menfolk. Yep, it was a productive day. Who knew we'd wake up to 30 dozen ears of corn yesterday?

The country vegetables scorn
To lie about in shops,
They stand upright as they were born
In neatly-patterned crops;

And when you want your dinner you
Don't buy it from a shelf,
You find a lettuce fresh with dew
And pull it for yourself;

You pick an apronful of peas
And shell them on the spot.
You cut a cabbage if you please,
To pop into the pot.

The folk who their potatoes buy
From sacks before they sup,
Miss half of the potato's joy,
And that's to dig it up.