First, let me make it perfectly clear, I am NOT an exercise freak. I mostly despise it except for my daily walk, but I don't consider that exercise, I consider it therapy (mental, physical, spiritual). But when I saw this challenge over at Bessie's Simple Days, I just had to take it on. After all, if ONE exercise was good for my WHOLE body, then that's the exercise I pick! Hey, if it's good enough for the Heisman Trophy Winner (1982) playing for the U of Georgia, NFL running back for Dallas Cowboys and later the Minnesota Vikings, -- Herschel Walker -- then it's good enough for me!

Walker said, "I didn’t grow up with a lot of money. My high school didn’t have a lot of money to afford a lot of the expensive weights. You know all this stuff. They used that as an excuse. I started doing push-ups and sit-ups during commercials as I was watching TV. And started doing about, sometimes 2,000 push-ups, 3,000 sit-ups, 1500 pull-ups, 1000 dips, or different things like that. I started creating different hand positions for all that, and I learned that could work you out."

In an age where physical fitness is all the rage and most people own a weight machine, an eliptical, a Nordic track or some other gizmo to exercise with, it's refreshing to me to hear someone say it's a good thing to use your own body to strengthen your body. If it works for the US Marines, it's good enough for me! 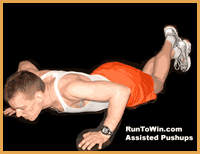 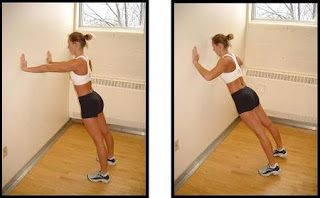 You can begin with wall push ups.

Now, onto the place where you can get information to start on your 100 consecutive push-ups in 6 weeks: One Hundred Push Ups. I'm going to be honest with you here. I could only do 2 of the Good Form Push-ups (and it killed me) and I think I did 9 of the "Girly Push Ups" with knees on the floor. So I'm a wimp. I decided that if I was going to do this, I would have to begin the process doing girly push ups (alternative method) and I don't aplogize for it. I figure, if I get to 100 push ups doing them the girly way, then I'll try for the Good Form Push-up later on. After all, the challenge is against my self and no one else. So far, I'm done with week one, level one, and I am already stronger than I was when I started. Is it hard? Yes. Can I do it? Yes! So far.

Do you want to join me? Let me know if you do in the comments.

"Strive to be the very best you can be. Run the race against yourself and not the guy in the other lane. The reason I say this, as long as you give it 110 percent, you are going to succeed. But as long as you're trying to beat the guy over there, you are worried about him, you're not worrying about how you've got to perform."
~Herschel Walker

Pictures borrowed from One Hundred Push Ups and Grrl Athlete
Posted by Gumbo Lily at 2:56 PM

Labels: Adventure, Health, Simple Things, This and That