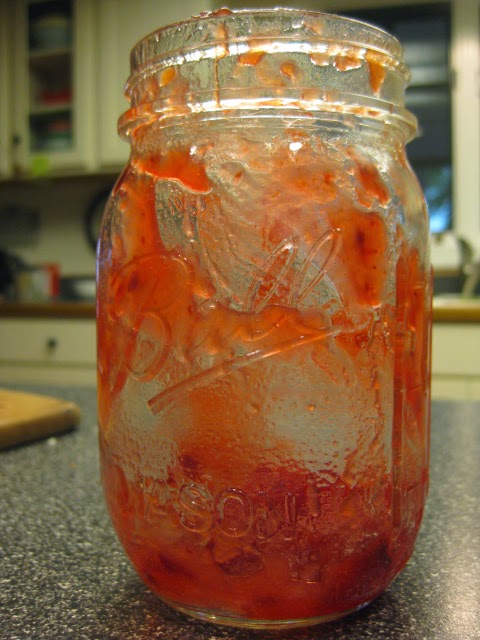 Fall is that special time of year when you start getting baseball bat sized zucchinis stuffed in your mailbox or trash bags full of very ripe fruit delivered to your door.  My dad, bless his heart, called me first, at least, and asked me if I could possibly use a trash bag full of ripe plums.  Ummmmm.  Well.  Sure!  Yes, I could use an entire trash bag of plums for something, I guess.  I thought to myself, if nothing else, I could feed them to the chickens.

The day arrived when OnlyDaughter delivered them as she picked up her children from a two day stay.  Now it was time to figure out what I'd do.  The first thing I thought of was jam.  I had never made plum jam, but I figured I had the ingredients for at least one batch so I'd give it a try, not knowing whether or not Hubs or I would actually eat the stuff, or if we'd just leave it to age on the shelves of the canning cupboard for years and years and then let our children throw it away once we passed on.  I'll write the year on the top of the jar just for conversation.  I could hear them saying, "Geez!  Mom made this stuff in 2014 and here it is 2044 and the seal is still good!"

First, there was the washing and then the sorting and pitting of hundreds of little cherry-sized plums.  This was the time consuming-est part of the process, but I pressed on, hoping for the best.  I always make jam to taste, not following a recipe exactly when it comes to measuring out the sugar.  You never know if the fruit is going to be very sweet or very tart so I add the sugar a bit at a time and taste.  One lick of the spoon and I knew this jam was going to be the bomb diggity.  And it was!  I had a glob on some fresh-baked bread and it was to die for!  Then I had JJo try it that evening.  She was floored by the flavor and took a pint home for herself.  I took a jar to JLo's too figuring they might like to try it.  Since the experiment turned out so well, I bought another case of jelly jars and a little more sugar and pectin and made another big batch of jam, and froze the rest of the pitted plums in the freezer for more jam later.  Or perhaps Dad might want some plums for wine making.

The dreaded trash bag of plums turned out to be nectar of the fruit gods.  So far we've had that plum jam on toast and on ice cream, and next I plan to use it as a layer in coffee cake.  Can't you just taste that tangy sweetness and see that beautiful red swirl in the middle layer of morning coffee cake?  Oh yesssssss!
Posted by Gumbo Lily at 10:28 PM