Gumbo Lilies on the prairie... 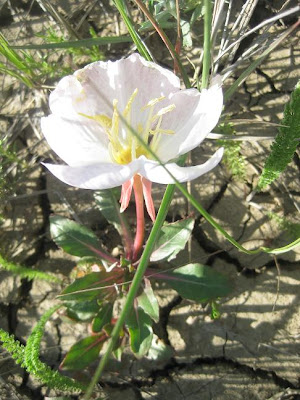 They are blooming on the prairie -- the Gumbo Lilies for which this blog is named.  They come up in spring and are usually blooming in full force by now but since we've had a colder-than-usual spring, they are a bit late in coming out.  Usually the gumbo lilies only last through June and disappear when the hot sun starts to beat down.  I just love the native prairie this time of year.  Do you see the cracks in the ground?  That's the soil we call "gumbo" which is a heavy clay soil -- the only type of soil these particular lilies grow.  It's slippery when wet and turns hard and cracks when it dries out.  The Gumbo Lily, or gumbo evening primrose,  is found in the northern Great Plains primarily on nearly barren clay banks, buttes, and badlands.  Flowers are about 3 inches across and have four petals which are white and fade to pink.  They are open in the early morning light and close shortly after the first direct sunlight and open again toward sunset.  Gumbo Lily is pollinated by night-flying insects.
. 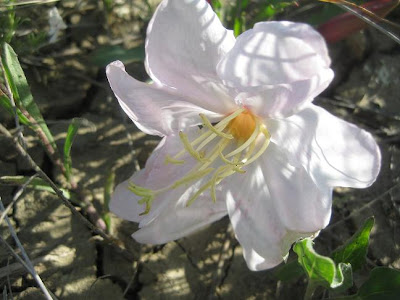 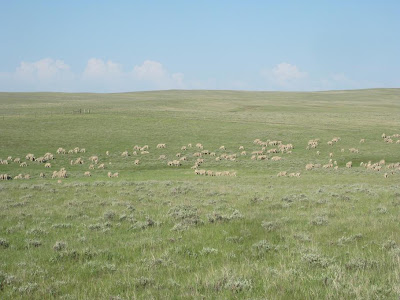 Click picture to enlarge it.
S. and I went out to the sheep yesterday to take care of some problems.  There was one yearling ewe that was on her back, stuck in the wet gumbo, and couldn't get up.  There were a couple other ewes that we think might have had grass tetany.  It's a condition that happens when the grass grows very rapidly and has very little magnesium in it.  The animals eat a lot of it and go down, bloat, and usually die.  The guys gave some calcium/magnesium in the flank to the ewes and they bounced right back within an hour or two.  S. and I took them back out to the others.  I thought you might enjoy a picture of the sheep grazing out on the wide-open prairie.  I absolutely love the smell of the sagebrush, and to see it so green and lush makes me (and the sheep) very happy.  The lambs are really growing and so are the wildflowers.
Posted by Gumbo Lily at 9:57 PM