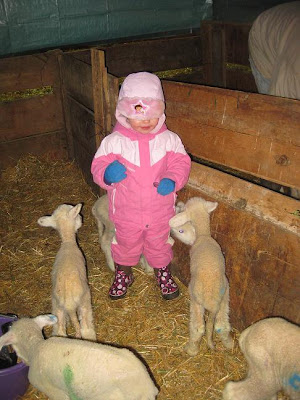 There is only one more ewe left to have her lamb.  All the others have done their jobs -- some more proficiently than others -- and it has been a lambing season well-done.  Above is a picture of Miss Peach playing with the bum lambs.  (Check out the adorable polka dot Boggs I got her!)  It's still in the "teens" for high temperatures here, so we continue to dress in our warmest clothes when we are out at the sheep shed.  Bum-mer!
We are up to 8 orphan lambs now.  That's 8 bottles, four times a day.  I'm reading up on ways to wean bum lambs early, can you imagine why?  The kids and I have raised many bum lambs through the years, but we have never weaned them early like some folks do.  The idea is to get them on solid feed as soon as possible.  I'm going to make a feed mixture of soybean meal, cracked corn, alfalfa, and salt and sprinkle a little milk powder over the top to entice them to start eating it.  They will get this mixture along with milk.  The thing I'll have to watch is sickness due to the change in diet and over-eating.  I'll keep on bottle feeding for a few weeks and continue to add in more of the grain mixture.  Eventually, we'll quit the bottles.  In the meantime, we vaccinated the little fellas with Clostridium perfringens, C&D which is an over-eating vaccine.  Too bad they don't make it for humans! 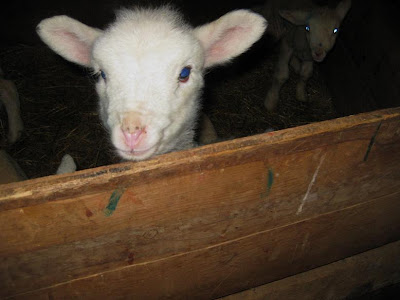 This is one of the most spunky lambs of the bunch.  I think I'll just call him Spunky!  The kids used to always name each and every bum lamb we had.  There were some unusual names too like...
Jack knife,
Mother Teresa & Gandhi (when we studied India)
Anthony Grey, Barny, Starbright, Brown Eyes,
Odin, Vili, and Ve (three Nordic Gods we had studied)
and many, many others I cannot remember.
Here's a short (very short) video clip that someone accidentally took of HP and me feeding the lambies.  You'll get a brief (very brief) *feel* for feeding bum lambs.

I got to do a little bummin' around of my own today.  After lunch, I drove to town for a haircut and went shopping for a few baby things for the next baby-on-the-way.  There will be a baby shower for Cupcake this weekend so I had to be prepared with gifts.  I've been a busy Gram, sewing up cloth diapers in my spare time so there are enough  when the baby comes.  Oh, there are lots of other baby goodies to sew yet.
Posted by Gumbo Lily at 9:31 PM