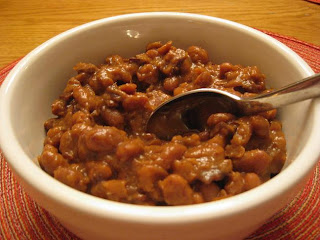 Do you ever get a hankerin' for foods that you remember from childhood?  My Grandma Schumacher was a wonderful cook who made all kinds of hearty, traditional foods.  One of those foods that she was well known for was baked beans.  She would bake them for hours in a large roaster until they were softened just right.  I know it breaks with tradition since baked beans are to be baked, not slow cooked in a crock pot, but wouldn't it be nice to be able to make Grandma's soft, creamy-brown baked beans without having to heat the oven all day?  My friend, Mert, recently shared this recipe with me that was just the ticket.  And was it ever delicious!

While beans are cooking in Dutch oven, fry the salt pork (bacon or ham) to render the fat and then add chopped onions and cook until lightly browned.  Transfer to the crock pot.  Stir in 1/4 c. molasses, brown sugar and the boiling water.

Cover beans with a piece of aluminum foil, then cover slow cooker with the lid.  Set crock pot to low and cook until beans are tender and creamy, 10-12 hours.  (You may cook on high for 5-6 hours)

Turn off slow cooker and remove lid and foil.  Stir in remaining 2 T. molasses, mustard, and vinegar and season with salt & pepper to taste.  Cover slow cooker with lid and let beans sit until sauce has slightly thickened, 15-20 min.  Serves 4-6

*It is said that slow cookers are notorious for failing to soften baked beans so by placing a layer of foil over the beans, it helps to keep the heat at the bottom of the pot and in the beans rather than letting the heat rise to the lid.  This step shaves off hours of cooking time.

The result?  Just like Grandma's!  She used to serve her beans with malt vinegar.  Shake a little on.  MMMmmmm.

Do you know the poem?