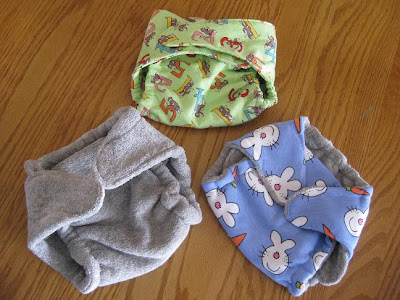 Only daughter, G., is due to have her first baby in April and so she asked me to sew up a bunch of cloth diapers for Cupcake.  I really like doing this so of course, I committed to it.  So far, I've only stitched up a half dozen, but I have many, many more to make.  I am using the patterns here and here.  I did buy a Quick Sew diaper pattern that is sized (S,M,L, XL), but so far, I haven't tried it.  I figured if I can sew a one-size-fits-all, why mess with sizes?

Tonight G. is going to try the diapers out on her friend's 5 month old baby.  It'll be interesting to know how they fit and if she might have suggestions in sizing.  There are so many patterns out there that I don't mind trying new ones to see which are The Best.

The green print diaper at the top of the picture is made of three layers of flannel.  It is supposed to be a pocket diaper, but G. and I wondered why a person would want to de-stuff a messy diaper and re-stuff clean ones?  So instead, I just made it plain and sewed up a bunch of diaper soaker pads from the scraps to place right inside the diaper next to baby's bum.  The other two diapers are made of cotton knits.  The grey one is knit terry cloth and the blue bunny diaper has the grey terry cloth inside and is a cotton knit outside.  Both are three layers.  None of these diapers have closures, but will be pinned or snappied shut.  It is possible that we may decide to do velcro tabs, but for now, we've chosen to keep the diapers plain.  I have made velcro tabs on other diapers, and they were well-received.

I think these new fitted cloth diapers are just wonderful.  They sure beat the old pre-fold diapers that I used on my kids.  I thought they worked just fine and they were very inexpensive.  After all, they were diapers -- made for messes, not for pretty. These days, the new-fangled cloth diapers are really expensive.  Check out the Fuzzi Bunz and see what I mean!  Yowza!  I knew I could make diapers on-the-cheap.

Want a quick sample of a good diaper sewing video?  Click below! She is sewing the same pocket-diaper pattern that I made (minus the pocket).

Don't have a diaper handy?  Use a T-shirt.
Watch Dad diaper his son.