Back to basics: the whisk & can opener 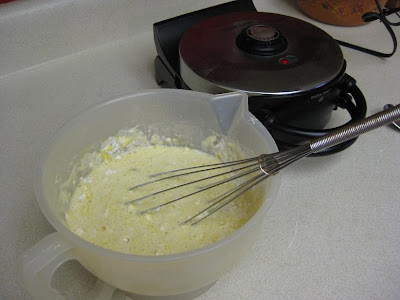 My electric hand mixer died.  The whisk came out.  It has been awhile since I've used a hand whisk to mix heavy whipping cream..  Talk about an arm and wrist work out!  If I whisked cream every day I could use enough calories to afford to eat it.  Giada De Laurentiis admits that she had one arm, her right, that was far more muscular than her other due to the constant whisking that she was required to do in cooking school.  I believe it!

This morning the whisking job was not so hard....just waffle batter which I beat with a whisk anyway.  So far I haven't any plans for whisking a dozen egg whites for angel food cake but if I do, I'll pull out the Big Gun -- the Bosch!  He's still running like the Macho Man he is.

I used to keep a hand-crank beater like this 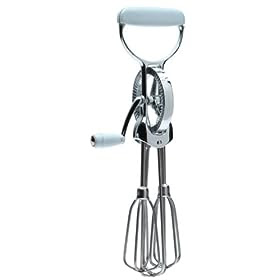 for times when the electricity was out or when I wanted to beat something quickly.  I ought to look into purchasing another one.  The gears on the one I had before got messed up and I didn't think I needed a replacement.  Plastic gears just don't hold up.   I do love a whisk, but I'd like to find a stainless steel variety.  I like to throw mine in the dishwasher and that makes for a little rust on the ones I own now.  Not nice. 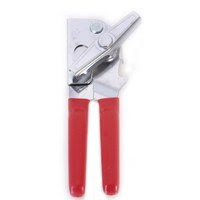 While I'm talking about tried-and-true basic kitchen tools, there's another Kitchen Helper I'm proud to own.  Just this month I decided it was time to retire my Swing Away hand can opener which I had been using in my kitchen for the likes of 10-15 years.  It still worked, but wasn't as sharp as it once was and tended to leave some of the lid attached to the can.  I thought surely I'd never find one like it out there with all the years that had passed by.  Isn't that the way it is?  Well, I went on the Amazon website to look at the can openers that people are using nowadays and to my surprise, I found a Swing Away just like mine!  For $8.99 I replaced Old Reliable with New Reliable.  I even bought four more for stocking stuffers for my kids!  The eyes rolled a bit, but I know one day they will appreciate their Swing Away as much as I do.


"Cut round on the top near to the outer edge with a chisel and hammer."  Directions on a can of roast veal in 1824
Posted by Gumbo Lily at 8:01 PM

Labels: Homemaking, This and That