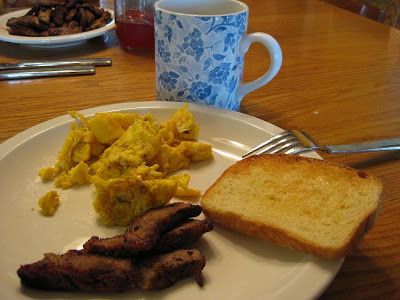 The first time I heard the term "second breakfast" was when I read aloud the book Little Britches to my young children. We so enjoyed that book and it's companions mainly, I think, because we could relate to a family of ranchers -- the chores, working with horses and cows, chickens, gathering firewood, and getting along with your siblings while you work. Second breakfast was one of those things that we had in common, but didn't have it named.

As you might guess, it is important especially during busy seasons (lambing, calving, fencing, and haying) that a ranch family gets out the door first thing in the morning to tend to livestock and such. Generally, cows eat before humans. So First Breakfast is very quick and simple. It may consist of a handful of almonds and/or raisins or dried fruit, a bowl of cereal, a granola bar, a peanut butter sandwich or a banana. The idea of First Breakfast is to give you enough of a boost to get your first chores done so you can get back to the house for Second Breakfast which is usually more generous. Like today's Second Breakfast, it might be left-over steak with eggs and toast or pancakes and bacon, sausage/egg muffins, yogurt parfaits and toast, and oftentimes it ends up being just another helping of what you had for first breakfast. There's always hot coffee and milk or juice. Breakfast is probably my favorite meal of the day. I love it and all the foods that go with it. My kids tease me that I love it so much that I like a little dessert at breakfastime. For me that would be toast with jelly or honey AFTER I've had my buttered toast with eggs and the fixin's. " Dessert toast" is the label they've attached to it and I like it.

You know the old saying, "Breakfast like a King, Lunch like a Prince and Supper like a Pauper." I wholeheartedly agree. But I wonder, is there room for Elevensies too? My first morning chores were to feed the sheep and to make bee butter. I have been making bee butter for a few years and I really love it. The recipe can easily be changed to incorporate your favorite oils and fragrances. My family and I use it especially for dry feet, hands and elbows, but it can also be used as a body butter. This is one of those all-natural creams that is good for your skin, leaving off the often-used petroleum based oils that commercial products use so liberally.

Originally, I found this recipe on the Care2 website and it is named non-petroleum jelly, a natural replacement for Vasoline Petroleum Jelly. I used to use Vasoline on my dry feet, hands and lips, but I wanted to try something a little more natural, so I gave this recipe a try and fell in love with it. I recommend making it in small batches, as written. I have doubled and even quadrupled the recipe, but I think it's better to make small batches and use it up rather than letting it sit around for a long time even though it keeps for up to a year. I renamed the recipe Bee Butter because the bees wax gives it a mild honey smell and flavor. I haven't added essential oil fragrances yet because I like the natural smell of the bees wax. Today I substituted coconut oil for half of the olive oil so this batch has a coconutty fragrance which I really like.

I was just looking at my Burt's Bee's lip balm and noticed that the first two ingredients on it were coconut oil and bees wax. The recipe I share with you looks very similar and is at least half the cost to make.

1. In a double boiler over simmering water and medium heat, combine the olive oil and bees wax until the wax has melted. (I use a pyrex measuring cup in a small pan of water)

2. Remove mixture from the heat and add the grapefruit extract.

3. Beat mixture with a hand mixer until creamy and pour into clean containers.


*I have made this without the grapefruit seed extract and it still maintains a fairly long shelf life. I have also added a couple capsules of vitamin E oil to the butter to enrich it more. You may like to substitute part of the olive oil with sweet almond oil, coconut oil or others. It is fun to experiment and find the combinations you like best.
Posted by Gumbo Lily at 9:01 AM