When the Frost is on the Punkin... 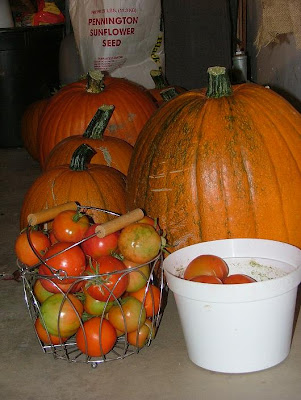 When the Frost is on the Punkin
~By James Whitcomb Riley

Tonight I went out to gather up the rest of the ripe and nearly-ripe tomatoes and then covered up the vines with blankets and sheets. My daughter-in-love brought over her ripe, orange "punkins" to store in our garage, and she'll be covering up her big, green ones that are still on the vine for the night. We're expecting the first frost of the season and then, as it so often happens out here, it's supposed to turn nice and warm again. September is the month of covering and uncovering flowers and veggies to protect them from the frost. I like to pull the pots of geraniums and baskets of petunias in close to the house on the porch for as long as I can. I enjoy s-t-r-e-t-c-h-i-n-g out the season for as long as possible....

They's something kindo' harty-like about the atmusfere
When the heat of summer's over and the coolin' fall is here --
Of course we miss the flowers, and the blossoms on the trees,
And the mumble of the hummin' birds and buzzin' of the bees;
But the air's so appetizin'; and the landscape through the haze
Of a crisp and sunny morning of the airly autumn days
Is a pictur' that no painter has the colorin' to mock --
When the frost is on the punkin and the fodder's in the shock.

Click here to read the rest of the poem....

Clarice at Storybook Woods is celebrating Autumn Bliss this week. Please stop by and see all her beautiful ideas to enhance your hearth and home this fall.
Posted by Gumbo Lily at 8:11 PM