from near death to life.... 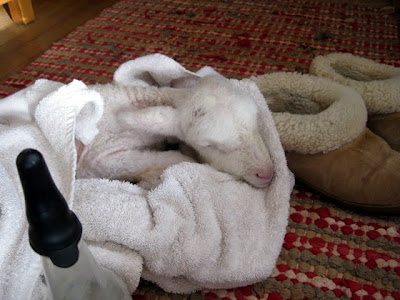 Early this morning I brought home a chilled, neglected lamb from the barn.  He was one of triplets and the mother had refused to lick him off and encourage him to be her lamb.  So he froze nearly to death.  I picked him up and put him on the floorboard of the pick-up truck and turned the heat on high and after finishing up my chores, I took him home to see if I could revive him.  The warm-up in the truck worked wonders and then I force-fed him just a couple ounces of milk to get his system jump-started.  It's amazing what a tiny bit of milk can do in the body of a newborn lamb.  By the time I took him back up to the shed, he was on his feet, blatting and ready to go back to mama.  My hope was that he would get some of the first milk from his mother before we ended up taking him to the bum pen.  We are only letting the ewes raise two lambs.  The triplets and quads simply will not make it.

This afternoon we had another chilled lambie that was born outside.  He was one of quadruplets!  Two of the quads had died immediately and two were alive but the little fella pictured above was honestly frozen stiff.  A. brought him to me saying he doubted the lamb would make it, but I assured him I would give it my best.  I had seen lambs in this frozen state before be revived to health and I had seen better-looking lambs die.  This lamb was so cold that I gave him a warm bath in the laundry sink in the mudroom -- just water, no soap.  Then I toweled him off with several towels.  You can't believe how wool holds water!  I dried him further with a hot hair dryer and then force fed him some milk with a syringe and then tried with a bottle and nipple.  I got a very tiny bit down him, but he didn't show signs of sucking.  He looked much, much better, but I wasn't sure yet if he would make it.  I put him in my pick-up truck again and turned up the heat while I made the bottles for the other bum lambs.  By the time we got back up to the barn, he was perky and would suck the bottle with no problems.  Hubs plopped him in the pen with his mother and the other lamb.  We weren't sure if she would take him since he had had a bath.  Ewes want to smell that birthy, wet smell that is on their fresh-born lambs and this guy was fairly clean, even though I did not use a drop of soap.  Hubs rubbed some of  the mother's afterbirth on the lamb so she had something to smell and something to lick off him.  She didn't push him away, so our hope was that in time she would accept him.  So far, so good.  We're going up to feed the bums in just a few minutes -- their last feeding of the day.  I hope we find her mothering her lamb.