Eyeing sheep and cleaning the coop... 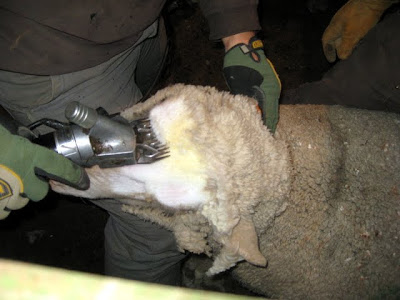 (see -- the yellow wool grease or wool wax which is where lanolin comes from)
It's been a great day!
We arose early and went to gather the 2-year-old heifers from the North Pasture.  I took the pick-up with the cake feeder attached and Honey took the Ranger to help drive them.  The cows were delighted to see their "feed wagon" come along and gladly followed me to the Buck Pasture where we left them for now.  I wish I had taken my camera, but I forgot.  Trust me, it was a beautiful scene watching the cows trail home.
With that job completed, we coaxed the sheep into the corrals the same way, and they, too, were happy to follow their feed truck to the corral.  We brought the ewes in to *eye* them.  That means we clip the wool from around the sheep's faces so they won't be wool blind in the winter.  When it's frosty and cold, the snow, frost, and ice builds up around their eyes and causes them to go wool blind and they can drift off. 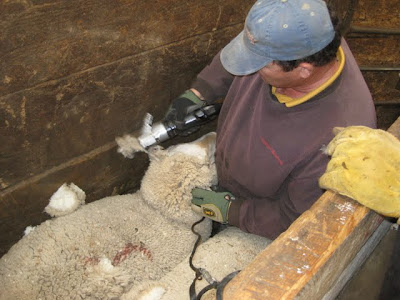 Honey took the lead in this process since he's the old pro.  He taught OldestSon how to clip around the faces.  My job, though small, was to hold the electric cord and to pour oil on the clipper as needed.  I also shoved sheep up into the ally and counted each pen out.  Besides clipping the wool from around their eyes, the sheep were also de-wormed. 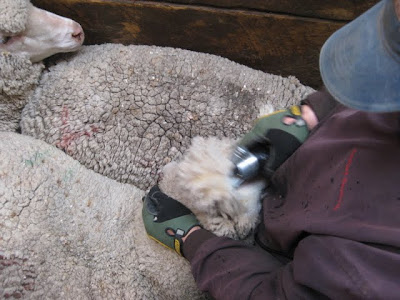 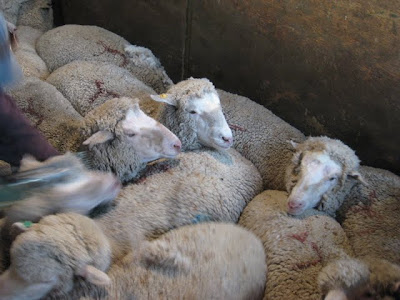 See how open the ewes' faces are now?  They really did have quite a lot of wool over their eyes.  Altogether we eyed 206 ewes and ewe lambs.  This is *one of those jobs* that we were glad get done and tick off the Before Winter To-do List. 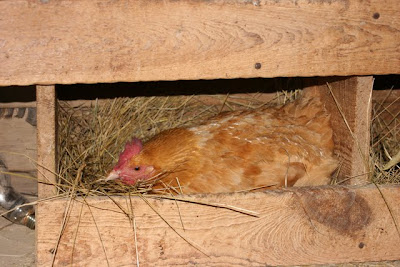 The other job Honey and I did together was to clean the chicken coop.  Yick! (T. says Yick is not a word, but Yick means "worse than Yuck")  It's one of the most despised jobs anyone does around here.  It literally stinks, and it's SO dusty.  I raked feathers and poop while Honey scooped it up with a scoop shovel and tossed it into the tractor bucket.  We also cleaned out all the nest boxes.  I finished the job by sprinkling Garden Dust around on the dirt floor to keep the bugs and mites away, and then I sprinkled a box of baking soda under the perch to deodorize it somewhat.  I added some pine shavings for bedding on the floor and then put some clean, fresh hay into the nesting boxes.  I decided to board up some of the nesting boxes because I don't have as many hens as my foremothers did.  Just 15 head in my coop compared to 50 head (or more) back then.  I can't imagine washing 50 eggs a night and storing them, let alone cleaning the coop out more often.  My mother-in-love used to sell her eggs to a small grocer in town and then bought her groceries with the egg money. 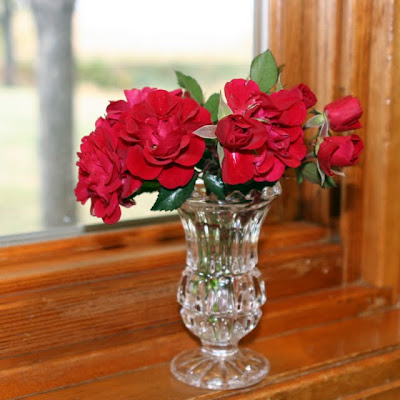 I'm adding a pretty little picture of the last of the roses.  I picked these tiny shrub roses since I know they will freeze over night.  We are supposed to get a cold snap starting tonight -- expecting freezing temperatures and possible rain and s--- in elevations above 4000 ft.  Our elevation is approximately 3500 ft. so we'll see if the precip remains in liquid form here.

Now it's time to eat supper and snuggle in for the night with that sense of satisfaction in jobs well-done and a good-tired that comes from hard, physical work and a day spent outdoors.  Our pillows will feel extra-soft and dreamy tonight.
Posted by Gumbo Lily at 5:35 PM