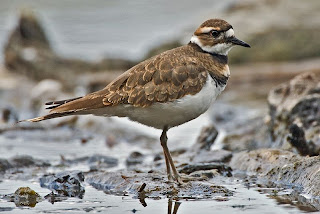 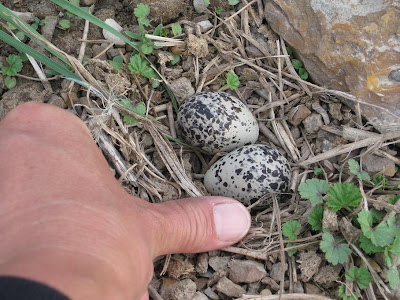 I've been on a mission to find the elusive Killdeer nest and I have accomplished it! A couple days ago, I wandered upon this pebbly nest with just two eggs in it. I put my thumb beside the eggs so you have an idea of the size of them. Aren't they the speckliest? 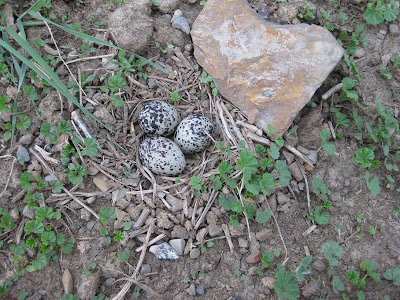 The next day there were three eggs in the nest. 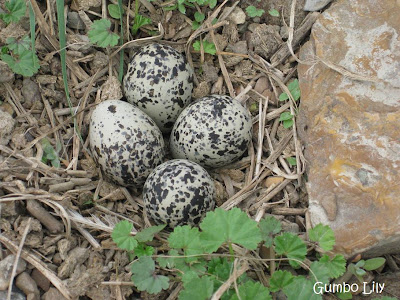 And today, four! Usually four is all they will lay and that is why when I found just two, I knew there would be more so I've been checking the nest daily. Do you see that all of the pointed ends of the eggs are tipped downward except for one? When I went back later in the day, they were all tipped downward. I don't know why, but that's how they want them. I know that hens will continually roll the eggs in the nest as they incubate them so I suppose it's the same with other birds.

Now for the exciting part....waiting for Mama and Dad Killdeer to hatch them into chicks. I plan to visit here a lot to see if just maybe Mama Killdeer lays one more egg in the nest. Then I will begin the countdown, marking it on my calendar -- 24-28 days of incubation. The tricky thing about seeing the Killdeer chicks is that once the chicks are hatched, within hours they are dry, fluffed-up, and out of the nest, following their parents on foot, pecking at the ground like hen's chicks. They are THE cutest little baby birds you've ever seen. I've mostly seen then when riding horseback. They're fairly easy to spot from up above. I hope I get to see the chicks from this nest. I'll keep visiting and waiting. Maybe I'll get a pic of Mama on the nest or of her "playing hurt."
Posted by Gumbo Lily at 7:36 PM