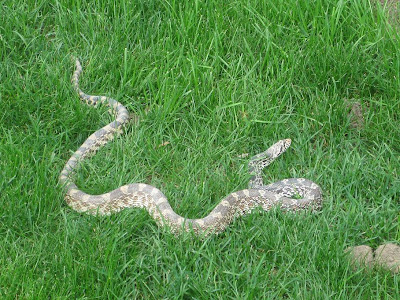 I headed out the door one evening with my big camera in hand and my field glasses round my neck, all set to go birding. I hadn't treated myself to any bird watching time except by-the-by, so I decided to start in the back yard on the west side of the house where the wind wasn't blowing as much and the sun was shining warmly. Immediately, way up high, I spied a pair of goldfinches bringing little bits of grass and small twigs to the crotch of our green ash tree. I was so excited and kept on walking and gazing upward and nearly stepped on this sleek fellow. I think I let out a short squeal, but I knew right away that he was nobody to worry about. He was a jolly bull snake whose main job is to eat mice and other small rodents. Bull snakes hardly ever strike, but mind their own business. They say that bull snakes will attack rattlesnakes so if that's true, we appreciate them for that. They are not poisonous so I'm not afraid of them, but I was surprised when I nearly stepped right on top of him. I'm sure he would've coiled up and tried to bite, had I done that, but since he didn't seem one bit bothered by me but was seeking a quiet place in the warm sun like I was, we shared the same plot of lawn for a few minutes. I watched the birds while he basked in the sun. 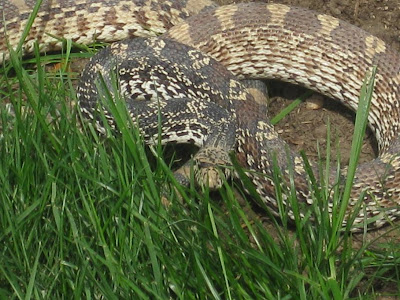 When he started moving my way, probably to head for his home, I decided to move. I think he would've just glided by me without any worries, but I really didn't want to wonder what he was doing or where he was crawling behind my back. So I got up and moved and took pictures of him. He did get a little bothered by me fiddling around him so he coiled up a little bit just to give me the "don't mess with me" look and I decided I had had enough of bird watching for the evening, picked up my things, and went back home.
Posted by Gumbo Lily at 4:15 PM