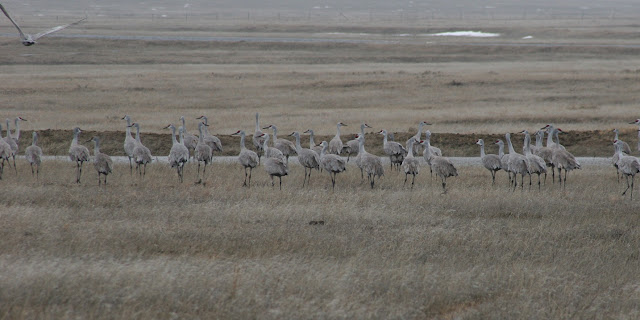 Sandhill Cranes
If you click on the pics, you will get a closer look at the red patches on their heads.
﻿

Yesterday NumberOneSon called on the 2-way radio and said there were a whole lot of cranes in our Horse Creek Pasture.  I radio'd back for their location and asked if anyone wanted to go with me to see the sight.  A young voice answered back, "We want go, Gram."  So I grabbed my camera, pulled on my mud boots and coat and flew out the door to get in the Ranger.  I met two of the kids who were excitedly waiting outside for me with binoculars around their necks.   Peach and Toodles climbed in the Ranger and we took off, sliding our way through the mud and muck out to the puddly pasture.

And there they were! From a distance, they looked like a herd of sheep because there were so many of them, and they blended in so well with the landscape like sheep do.  We inched closer and I kept snapping pictures in hopes that one or two would turn out ok.  Then I turned off the motor and we just sat and watched and listened to them talk to one another.  It was quite a sight!  And quite the sounds!  I have never, ever seen this many Sandhill Cranes in one place.  I suppose there were at least one hundred.  I'm sure they are migrating through, and likely a few pairs will stay behind here on our prairie.  We always see cranes in the summer with their long-legged babies walking behind their parents through the pastures.  We often have a pair living fairly close to our home and they will come by our stock pond and perch in our tall cottonwoods in the evening.  It's kind of scary when I walk by the trees on a summer's night to shut the chickens and a couple huge cranes flies off over head with their rattle-y calls.

After our bird-watching adventure, I was telling the girls that I remembered reading a very good book called Cranes in My Corral about an Oregon rancher's relationship with four cranes who lived in his corrals.  I think I borrowed the book from our local library.  I thought it might be a good story for the kids to read.

Once I dropped the girls off at their house, I drove home and walked in the door and smelled hot rice.  O golly!  I had forgotten all about the rice!  I had set some rice on the stove to boil and ran out the door with such excitement that I forgot all about it.  Thankfully, the rice was not scorched and supper was not lost.  Not to mention, we had ourselves a fine Sandhill Crane Adventure!

Today a large flock of robins were chattering and fluttering around in our three juniper trees in the front yard.  Another migration on this wet, wet snowy day.  The big snowstorm that we were anticipating went south and east of us.  We did get some rain and slushy snow out of it, but the poor folks to our east got slammed with a foot or more of snow along with 50 mph winds.  That's hard work ahead.
Posted by Gumbo Lily at 9:06 PM