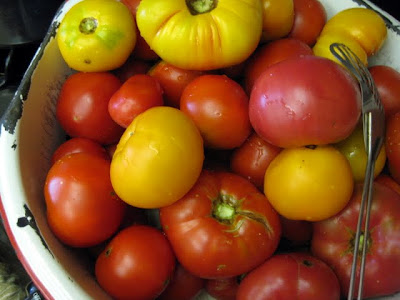 The majority of the heirloom Rainbow tomatoes are jarred up!  I saved a few for my daily tomato sandwiches (toast, mayo, thick sliced tomato, salt & pepper).  I hope that my own tomato plants will be ripening up soon so I can continue my sandwich routine.   Aren't tomatoes in jars the prettiest? 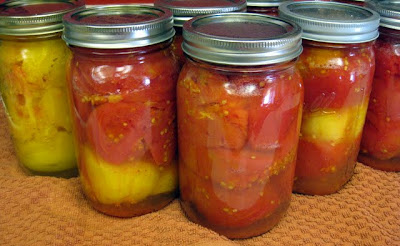 Tomato Memory...
One summer night a couple of friends of our kids were here.  It was one of those late summer sleepover things.  A. (our eldest child) and R. (his friend) were out in the garden.  I'm not sure if I had sent them there to pick or if they were just out looking around at the varieties of tomatoes.  (Ha!)  G. had her girlfriend over who happened to be R's sister and the girls were upstairs in G's bedroom playing and taunting the boys below.  Don't ask me where I was.
You know how sisters can sometimes be.  Yelling out the window, making faces at their brothers, giggling, taunting.  The boys couldn't take one more minute of  those girls from the high bedroom window that overlooked the garden.  It became irresistible to them -- wanting to give those heavy tomatoes in their hands a heave.  At their sisters.  The tomatoes were flung and the girls were their targets.  I honestly don't know how many tomatoes were thrown at that window, but there was a lot of cleaning up to do.  The boys had to hose off the house and clean every bit of juice and seeds away.  I can't remember if the girls had to help them or not.  It WAS a mess.  That's all I remember.  I had plenty of tomatoes that year.  The incident  didn't seem to affect my canning production.  I'm sure the girls had to help can tomatoes the next day -- a chore my daughter despised.  Sweet, motherly revenge.
Now I leave you with my favorite summer song.
Homegrown Tomatoes
by Guy Clark
Ain't nothin' in the world that I like better
Than bacon & lettuce & homegrown tomatoes
Up in the mornin' out in the garden

If I's to change this life I lead
I'd be Johnny Tomato Seed
`Cause I know what this country needs
Homegrown tomatoes in every yard you see
When I die don't bury me
In a box in a cemetery
Out in the garden would be much better
I could be pushin' up homegrown tomatoes
Posted by Gumbo Lily at 6:26 PM