A puddle of lambs, a frosty doe, and Wings... 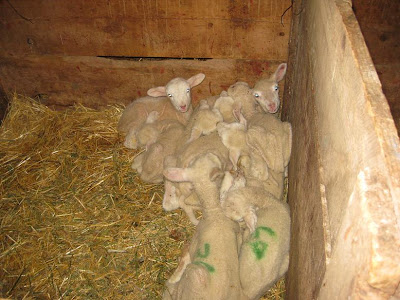 "A puddle of lambs" as son, S. says.
If you click the picture to enlarge it, you will see that some lambs are sleeping on top of each other.  If they had mothers, they would be snuggled in next to her, but they only have each other.
These are the eight bum lambs which I see every morning at about 7:00.
They are all sleeping together in a puddle but when they see us and hear the rattle of the glass bottles, they perk up and jump to their feet, each one begging to be first.  I sneaked up on them at this particular time.
The number of bum lambs changes constantly.  Some of them will be grafted to new mothers.  Some new lambs will be added in when their mothers reject them or when there are triplets and the mother doesn't have the milk to sufficiently feed them.  Our goal would be that they all had mothers, but it's likely not going to turn out that way with all the triplets we've had.
At last count, there were just 17 ewes left to lamb.  Another day or two and we will be done with lambing and will only have to feed them and keep watch to see that the lambs are all staying healthy and well-fed.  We have been putting all the ewes and lambs in the barns at night, making sure the lambs mother up and have a chance to get out of the cold and wind. 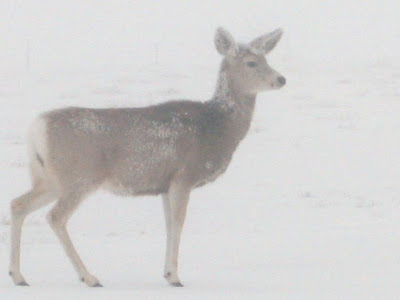 While driving to a friend's house this afternoon, this young doe jumped in front of my car.  I stopped and let her cross the road and then clicked a quick picture of her through the window.  The picture looks blurry, but there was dense fog all day and it really did look hazy.  Trees and power lines had a heavy coating of hoar frost, and so did the animals.
I picked up an old book, Wings by Gene Stratton-Porter, which has been lying dormant in my bedside basket for quite some time, and I'm glad I took it up again just a little less than a month from the Spring Equinox. In March we will begin to see a few of our old feathered friends fly back home for spring and summer and Gene Stratton-Porter rallies my hope that spring will come again amidst the snow and cold of today.   I'm a big fan of GSP and have many of her books and I'm grateful that my public library still carries several that I don't own.  I love the way she describes scenes in nature.  It is as if I am walking through the field with her and we are about to come upon a nest of eggs.  We see the mother bird fly up so we come in close to examine the color and size of the eggs as well as the nest built with mud,  horse hair, rough stems and fine grasses.  Reading this book makes my nature-lover's heart  long for spring and the nest-cradles that will soon be made in our own trees and in the prairie grasses and on the bare ground.  Read this passage below and see what I mean.

Of the dozens of nests Bob had located there was not one so exquisite as this vireo's, for at the branching of two elm twigs, no higher than my head, she had built a pendent cup lashed to the limbs with bits of string and hair, wound securely round and round and evenly carried to nearby limbs.  When it was solidly timbered, securely fastened and softly lined, to Bob and to me, who had watched its progress, it seemed complete, but the little bird-mother, with exactly the same loving impulse that is in the breast of a human mother when she adds lace and ribbon to her baby's cradle, set about gathering heavy, rough, snow-white cobwebs and festooning them over the outside until the nest appeared as if dipped in ocean foam.  She stuck through these webs a number of fantastically shaped little dried, brown, empty, last-year's seed-pods, as a finishing touch, then Bob took off his hat.  He said she was a lady so no gentleman would stand covered before her.

Back to my reading now.  The next short chapter is Molly Cotton's Hummingbird.