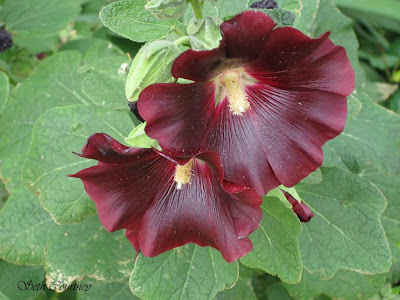 My dad called me this morning to tell me that a lady from the Landreth Seed Co. was in the city harvesting the Hollyhock Nigra, "Which," said Dad, "is very rare. And Jody, YOU have them all over your garden! Don't forget we asked you for some seed this fall!"

I found out that the Landreth Seed Co. is the oldest seed house in America, established in 1784 in Philidelphia. Some of David Landreth's customers were George Washington, Thomas Jefferson and Joseph Bonaparte (Napoleon’s brother). Landreth's claim that they have sold seeds to every US president from George Washington to FDR. (how's that for vintage?)

Isn't it funny that when something is labeled "rare" we get all in a dither and want to make sure we have some of the precious seeds? All I ever knew about my hollyhocks was that they came from old Doc Marousek's clinic garden (which is now an accounting firm and the hollies are now removed). I picked some after a baby appointment for one of the kids many, many years ago. Doc would be thrilled to know his old hollies are now "rare" and "heirloom." Perhaps I ought to take him a packet of his own rare seeds!

This afternoon I did harvest some of my Hollyhock Nigra seeds to share with friends and family. Perhaps some of you would be interested in my rare, heirloom seeds too? Well then, let's have a little drawing. If you're interested in seeds, just leave a comment telling me you'd like some and I will draw for a few packets.

FULL SUN. Native to Turkey and other parts of Asia, the HOLLYHOCK was introduced into Britain in 1573. It was a versatile medicinal plant which was used for tuberculosis, bladder inflammations, soothing swollen horses’ heels, etc. The name originated during the Crusades when the plant was referred to as “holy hoc” (hoc being the Saxon word for mallow or salve). HOLLYHOCK NIGRA was described in 1629. Its huge, black-red flowers have been prized by gardeners for centuries.

*I wonder how hollyhock was used for these medicinal purposes? Anyone know?

**Addendum:
Questions about growing hollyhocks from Anna in the comments.....

Anna, Hollyhock seed can be planted in the fall or early spring. Naturally, a hollyhock drops her seeds on the ground in the fall and those little seeds come to life early in the spring but do not flower until summer or even late summer. These are biennial plants so that means that they bloom every other year. Actually, these hollies reseed themselves year after year so you won't have a year without flowers. The first year they *might* only come up and make a big green plant and then the second year they will flower. The hollyhock is a large plant. Sometimes they can tower up to 6' in height so plant them as a background or next to a building. Since they reseed profusely, take care where you plant them so they don't take over an area. They will. Or plant them where you don't mind having them take over. They need very little special care. Most will come up, leaf out and bloom without any help at all. When I was growing up, these flowers were often found in back alleys and my MIL always called them the "Toilet Flower" because people in the olden days planted them alongside their outdoor toilets.....at least the country folks did.
Posted by Gumbo Lily at 2:30 PM

Labels: Flowers, Nature, Practical Living, Seasons, This and That