I finished digging up the rest of the potatoes today and there were loads of them.
Thank goodness for littles who like to kneel down and pick up spuds!  The grands were a great help.  I'm guessing we dug up 50+ pounds of potatoes today, adding that to about 25 pounds previously dug.  I'm happy with it, especially in a dry year.  One thing I'm a bit frustrated with though is the scabbing that happened on them.  At first I thought it might be due to some insects or maybe pill bugs (roly poly bugs), but upon further research, I have come to find out that it's a bacteria that happens on tubers when the pH is too high or when watering isn't sufficient or is applied at the wrong time.  There are also potato varieties that are more prone to potato scab than others.  So now I'm armed for next year's planting with more information.  As I've said before, every year is an experiment in the garden.  Just when you think you've got it figured out, you find another twist in the garden variables that you didn't reckon for. 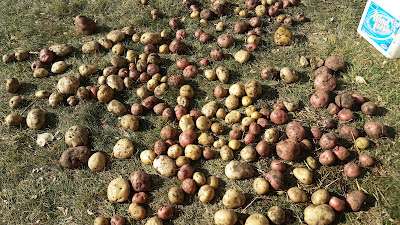 Letting the freshly dug spuds dry for a few hours in the sunshine. 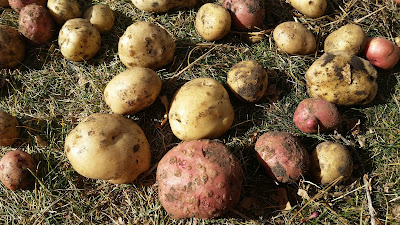 Do you see the scabbing?
I noticed it more on the red potatoes than the white, but the white had it too. 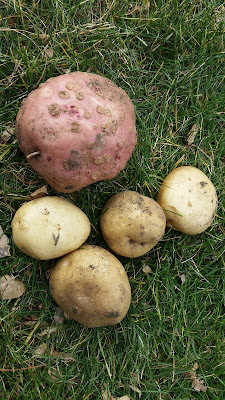 I also noticed that the smaller spuds didn't seem to have as much scabbing.  Perhaps they got more water at the particular time they were setting on?  I'm not sure.  The good news is that the scab doesn't affect the edibleness of the spuds.  They won't win any awards at the fair and won't bring prime dollar at the farmer's market, but we'll give thanks and eat them up gladly!  I have to say, there's really nothing like a homegrown potato!

One more thing I wish to share with you.  Since I do the "No Dig Method" of potato planting, I've also been looking at the "No Dig(Till) Garden method.  Basically, you smother grass and weeds with a good layer of compost or use heavy carpet or other stuff to suffocate the grass.  Instead of tilling, you apply a thick layer of compost or well-rotted manure on top of the soil and plant.  I'll leave a couple links for you to explore if you're interested.  This fall I dumped my raised beds and added more rotted manure to my fenced-in garden.  In our dry climate, I have found that the ground beds seem to hold moisture better than the raised beds.  I didn't till the garden because the tiller quit me.  It needs a carburetor.  It turns out to be a blessing -- I will try the no-till method instead!  Less work!

All that's left standing in the gardens are the asparagus, parsley, and a few short lettuce plants.  I think I'll dig the lettuce up and bring it indoors for a mini-salad garden under grow-lights.  I've ordered a few lettuce seeds to plant indoors for winter.  Another experiment!  I did cut a gob of parsley yesterday and I'm drying it on the dining table.  It really does taste better than the dry, powdery stuff you buy at the store.  It's SO green!  And delicious!

Thanks for stopping by!