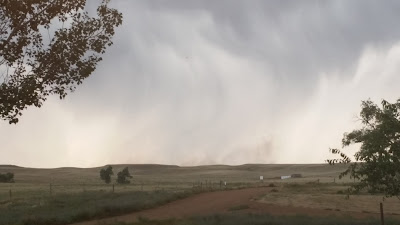 Gray clouds above with smoky, brown puffs on the horizon tells the story -- clouds with dry lightning and no rain.  After our Independence Day celebrating, we came home, settled in, and then the lightning cracked and fires popped up everywhere around us.  The dispatch fire pager had chatter about fires in every direction.  Lightning struck our land and a fire started in the East Pasture, and as soon as the men had quelled it and were mopping it up with our range fire trucks, another fire started up right next to them just over our fence on the neighbor's place.  After fighting one small fire, they were running out of water and so called me to bring up the tender truck that holds 1000 gallons of water.  It's an old, old antique of a thing, but it still runs and carries water.  It's a manual, stick-shift with a big steering wheel with no power steering.  That's how I learned to drive!  I bumpety-bumped through the pastures and got the truck up to the fire area so the firefighters could refill their rigs.  JJo and Chief came behind me with the Ranger and took us back home to keep watch and to direct any other trucks up to the fire. 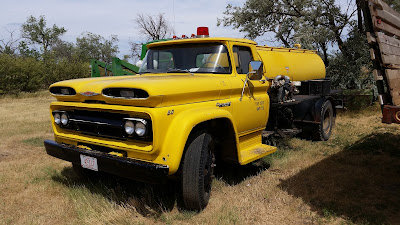 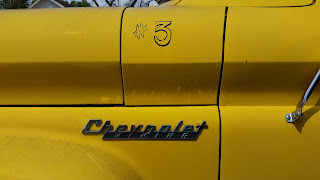 Tonight we are expecting more clouds to come over.  We're hoping that there will be rain in them.  It's going to be a long summer if this becomes our nightly job.  I know we aren't alone in this.  Many in the West are fighting fires.  Just today we were bringing the tender truck back to refill it and a long way off I could see smoke.  It was in Wyoming, just over our border.  Too far for the men to go unless they were in great need of trucks.  We're watching the skies tonight and keeping an eye on the horizon all around.  If you think of us, pray for rain.  Thanks.
Posted by Gumbo Lily at 10:09 PM