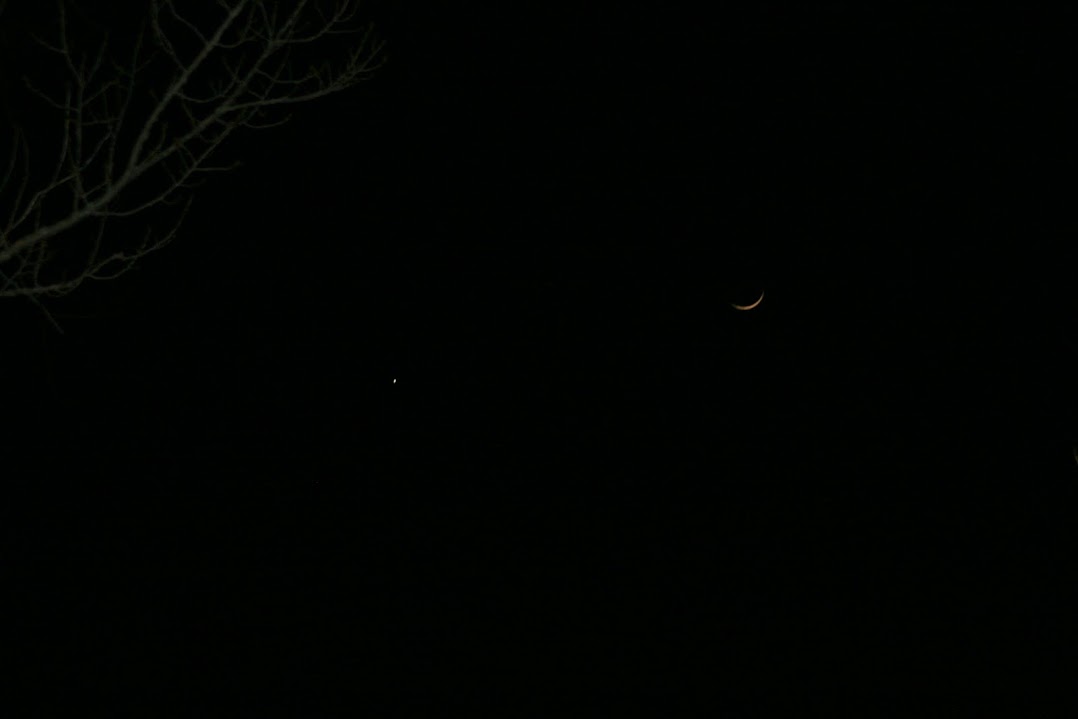 What is it about the wintertime sky that makes it so absolutely black and the stars so absolutely bright?  Of course, the moon, being new, keeps the night sky dark, but there's a crispness, a sharpness that makes the stars so very clear this time of year.  This is a very amateur photo of the night sky just at dusk where you are seeing Venus and the New Moon.  I was reminded by MK over at Through a Glass, Darkly that there is much to see in the sky right now.  Her husband, Adam, is conducting an  Astronomy class, and they, too, were observing the New Moon and Venus.  See it here.

So after enjoying a lovely gaze at the Moon and Venus, I ventured into the Eastern Sky to look for the comet, Lovejoy.   I had tried to see it back around January 7th when was supposed to be at its peak brightness, but I could not spot her then.  We were in-and-out of cloudy weather at that time so perhaps that was my trouble.  I went back to my favorite sky-gazing website, Sky & Telescope, to find out where Lovejoy should be found since it continues to move away.  S&T said it was between Pleiades and Aries.  First I looked in the Eastern sky for Orion's 3-star belt, then up from there I spotted Pleiades.  With bare eyes, Pleiades looks like a dusty web of stars way up above Orion, but with binoculars, the star collection is very clear.  Then I found Aries to the right of Pleiades.  Now.....somewhere in the middle of the two, there should be a fuzzy green ball of light that is Lovejoy.  We usually think of comets with long, bright tails, but with just a pair of binoculars, all I would see was a fuzzy green-gray ball and no tail.  Here is the link to tonight's viewing of Lovejoy in case you want to see the sky map.  Lo and behold!  I found it.  I found it several times to my great joy!

(From Sky & Telescope by Alan Dyer)

I was so excited, I had to share the fun by calling my parents in town.  They had been looking for Lovejoy these past weeks too.  OnlyDaughter and her two children were there for supper so they all went out on the deck to see the New Moon and Venus, and to try to spot Lovejoy.  I phoned the neighbor grandkids too and told them I'd come over to show them the stars and the comet.  All of our littles have learned to spot the moon -- day or night -- and they are turning into curious little sky watchers. (Do you know how that thrills my heart?)

Outdoors I went, tramping through the little bit of pasture that is between our houses and met the grands who were in their jammies and who were pulling on their coats, hats, mitts and boots to go out to look at the sky.   Their Mama, JLo, and the oldest, Peach, are very good students, trying hard to see each thing, but Toodles and Boy Blue just enjoyed running around in the darkness screaming and playing.  We found the constellations and JLo found the comet too.  I'm not sure if Peach did, but we did see another interesting thing.  A star, I think, that was flickering red, green, white.  At first I thought it was a plane, but it stayed stationary in the sky and was very bright, easy to see with bare eyes.  It was located near Orion. I looked for it on Sky & Telescope's "This Week's Sky at a Glance," and I think it must be  R. Geminorum (from Jan. 20th's posting).  It says, "R. Geminorum is a red long-period variable star."  That certainly described it.  So many, many things to see in our vast night sky.  I hope you are able to take a few moments of your evening to enjoy it.  So much to see!  So much beauty!

Gemini shines high in the east these evenings, off to the left of Orion. In Gemini's center lies R Geminorum, a red long-period variable star sporting the rare elements zirconium and technetium. R Gem is brightening toward a February maximum - See more at: http://www.skyandtelescope.com/observing/weeks-sky-glance-january-16-24/#sthash.OIIyQHKO.dpuf
Posted by Gumbo Lily at 10:12 PM