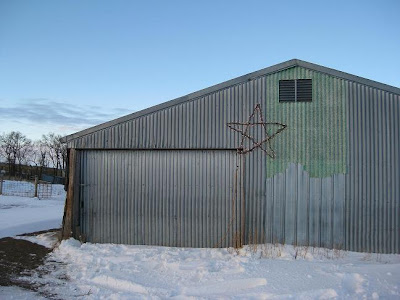 Lighting the star on the barn is one of my most favorite parts of the Christmas Season; I think I like it even more than putting up the Christmas tree.  (It's easier)  I had to fasten new lights onto the star frame this year.  YoungestChild and Hazel Peach went with me to help hang it up and plug it in. 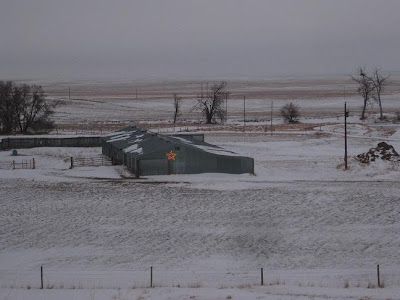 This is how our star looks from the road in the late afternoon.
This is the very barn where we will  lamb the sheep in just a few months. We also calve some of the cows here in the spring.  I like to think of it as a place similar to the stable where our Lord was born in Bethlehem.  Even though it does not compare to the crudeness of that lowly manger, it is still a barn that is meant for animals, not for the King of Kings.  But God chose a place like this for His Son to come into the world.  Birthed in a barn.   Adored by common shepherds. 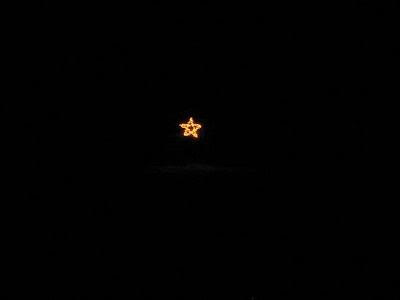 This is what our star looks like from the road in the dark of night.  I absolutely love driving home at night and seeing the star appear out of nowhere.  We live way out in the country on a road less-traveled than most, but the light shines in the dark for those few who pass by.  It calls to mind Psalm 139:7, "Where can I go from your Spirit?  Or where can I flee from Your presence?"  Even in the remotest parts of the earth, God is with us.
Posted by Gumbo Lily at 5:05 PM