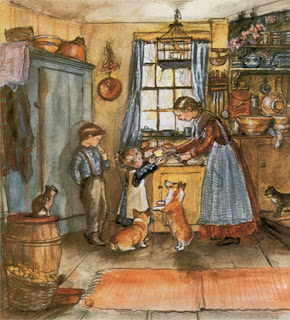 Today we're under a blizzard warning  and so everybody's been indoors doing things.  The guys have mostly been on the couch watching football and I have been puttering around in the kitchen.  I had wanted to try to make some rosemary maple-glazed nuts and so I gave that a whirl.  They would have been so good, but the last step of baking them in the oven turned out to be much too long and the nuts have a burnt taste to them, even tho they are still pretty good eating.  Note to self:  the next batch gets only 10 minutes in the oven.  I thought about doing something with the half sack of peanuts and decided to make peanut brittle.  (I love peanut brittle)  I used a microwave recipe for it and made it according to the directions.  The time before when I made it, I cooked the sugars first and added the peanuts later in the cooking process so guess what?  It burned.  Bah!  Note to self:  Cook sugars first, then add peanuts.

Tom asked me to make some divinity.  I usually don't make that.  The boys always have in the past and they're good at making it.  I gave it a try. It was just OK.  Nothing fabulous, but Hubs and J. are eating it up.  I'm not a huge fan of divinity anyway.

On a good note.....J (youngest child) and I are starting Cooking School, that's what I'm calling my cooking lessons for a young man who needs a few basic cooking skills under his belt.  I think it's important that every man learns to cook a few good things to feed himself.  Our first lesson was last night and we threw together a dandy roast beef hash.  We chopped up left-over roast beef and the potatoes, added in some peppers, onions, garlic, and mushrooms and sauteed it in the cast iron skillet in some olive oil.  Deee-lish-ious!  Today we made Mandarin Chicken -- J's request for lunch -- and served it over hot rice.  YUM!  Definitely a do-again.  We did alter this recipe too.  Both of us decided it needed a whole sliced onion and a tiny bit of lemon zest,  and we decreased the sugar to 1/4 cup.  We also added in a tablespoon of Hoisen Sauce and at the end, threw in a handful of cashews.

Another recipe I tried today is one for homemade deodorant.  I know.....weird.  But I'm one of those people who always stinks and I thought that maybe trying something different would help.  The authors of the recipes I found all swore that the homemade stuff worked very well, so I stirred up a batch this afternoon.  I tweaked two recipes, this one and this one, so that I could use the ingredients I had on hand.  Now to test it out over a few weeks and see what it does!


Here's my original recipe based on their recipes.


In a pyrex measuring cup or bowl, melt beeswax for about 1 minute in the microwave.  Add coconut oil and melt.  Stir in the rest of the ingredients with a fork or small whisk until smooth.  Pour into half-cup mason jar.


To use, take a little in the fingertips and rub into arm pits.


This recipe fills a half cup jelly jar perfectly, but I've read that it can spoil so I only put half of it in my jar and put half in the frig.  I added the beeswax to firm up the mixture and keep it in place.  If Burt's Bees can make a deodorant out of these ingredients, so can I.


The wind is still blowing and the snow is blocking the view.  It's getting dark now and all I can see is the yard light.  I'm looking forward to nicer days soon.

What are you doing this Sunday?
Posted by Gumbo Lily at 6:06 PM

Labels: Around Home, Recipes, This and That