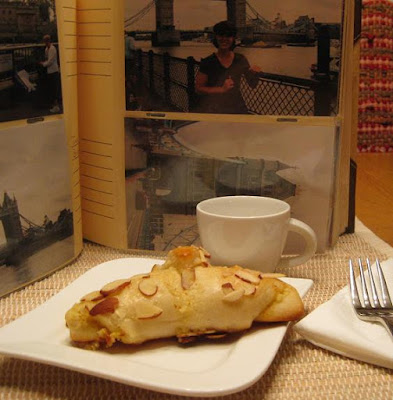 They're going to be calling me to come bake for them in London, I just know it!

Ever since visiting England with Only Daughter back in 2005, I have had a longing for a delicious almond danish like those we had in the local bakeries.  While visiting Arizona, my friend Kathie, who still doesn't have her foodie blog going yet (ahem!) recommended an almond paste to me which I gladly snapped up.  Almond paste isn't one of those items that rancher grocery stores carry.

Saturday was Baking Day at my house and I just had two things in mind -- bread (for toast) and bread sticks to go with our chili, but since I made a 4 loaf batch of dough, I got to thinking about those almond danishes and I figured that even though this wasn't croissant dough, just adding that almond filling and some almond slivers to croissant shaped rolls would do the trick.  So I went online and found this Almond Filled Croissant recipe and whipped up a batch of filling.  This recipe is actually used for day-old croissants which you slice open and fill and then bake again.  The French call these croissant re-do's Croissants aux Amandes.   Here is a nice little article about  them that I found first when I was searching for the perfect almond filling.  Don't the Croissants aux Amandes look scrumptch?   I will definitely try them when I have some day-old croissants laying around or if I find a good deal at the bakery.

Just making this almond filling was a joy in itself.  I could have eaten a whole bowl of it by the fingerful, but I resisted.  I did however lick the counter top clean after I was done.  Well, not really, but I did scrape it and lick it off the scraper.  Heaven!

After spreading the filling onto my little dough triangles, I rolled them up and  brushed the tops with an egg wash, then sprinkled with slivered almonds and crystal sugar.  I've had colored crystal sugar before, but I bought clear crystal sugar in Phoenix.  I swear, they just have EVERYTHING in that town!

All I can say about these delicacies is:  Why eat regular bread when you could be eating an almond croissant?  Next time I'll make these with Kathie's croissant recipe (yes, the same Kathie with no foodie blog).
Posted by Gumbo Lily at 1:00 PM