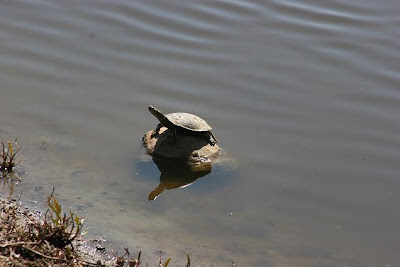 I walked by the stock pond by our house a couple of days ago and saw this turtle sunning himself on a rock so I just had to dash back to the house to click his picture. I was certain he'd plop back into the water by the time I returned, but no, he stayed. And he even let me get close enough to get a decent shot. Most of the time when I see turtles basking in the sun, they see me first and hide underneath the water. He must have been enjoying his sun tanning so much that I was the least of his concerns. Notice how stretched out he is and how he made his neck wide to soak in as much sun as possible. 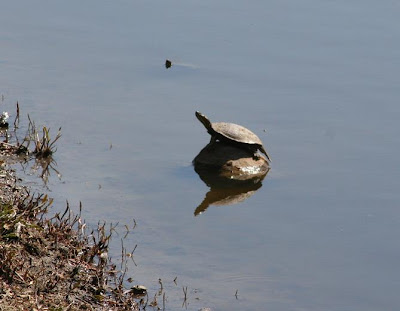 Do you see Myrtle Turtle's head poking up through the water? I'll bet she'd like a turn on that rock too! Signs of spring!

We have the Western Painted Turtle up in our neck-of-the-woods. The shell bottom has a pretty yellow and red design that looks as though it is painted on. They like weedy freshwater ponds like we have. 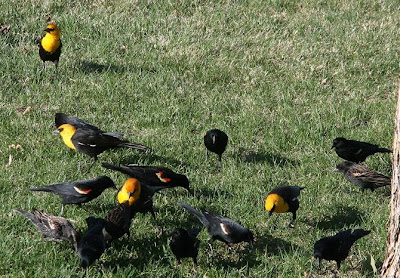 Take a look at the bright yellow heads on these blackbirds. Bet you can't guess their names.....
Yellow-headed Blackbird. How original is that? That's how we name our animals here too. We once had a brown horse named "Browny" and the blue-gray tomcat is named "Blue." Blue's son carries the name "Blue's Revenge." Now, notice the blackbirds with the red/white wing patch. The male's patch is mostly red and they take the name Red-winged Blackbird (another original name). Click here to read more about the Yellow-headed Blackbird and hear the terrific call he has. I call the blackbirds the "Rock 'n' Roll Band" of the avian kingdom, you'll hear why.
Posted by Gumbo Lily at 1:23 PM