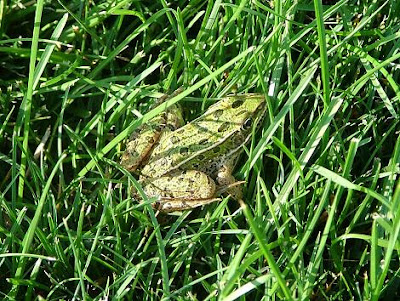 It's been a long while since we've seen many frogs about. With a severe 7 year drought, they've really died off. Not completely, but they have been greatly reduced in number. Nowadays though, we are seeing them everywhere. As I mowed the lawn yesterday, they were hopping about in between swaths of mowing and jumping out from beside the house as I walked by. They were moving underneath the weeds and flowers I was pulling up in the garden. It seems they've made an excellent come-back this year. While pushing the mower the gnats were billowing up from the grass so I can imagine that the frogs were very content to be there -- sticking out their tongues to catch them like snowflakes falling from the sky.


Hubby was out baling straw in the neighbor's wheat field all yesterday and he came home to tell me that he saw several large frogs in the field. If you've ever been in a wheat field, ripe for harvest, you know that it's a very dry place --not somewhere you'd expect to see slimy, water-loving, google-eyed amphibians. It is shady with tall wheat heads floating high above, but it's still dry. Perhaps there was a little muddy creek there somewhere closeby. The straw is so dry it must be baled "in the dew" of the early morning or night, which Hubs was doing, so that may explain his sightings.

Did you know that frogs are chameleon-like in that they will change the color of their skin to match their environment? If they're in a very green grassy place, their skin will be bright green, but if they are found in slate-colored mud, they will match it and blend right in.

The Frog
by Hilaire Bellock

Be kind and tender to the Frog,
And do not call him names,
As "Slimy-Skin," or "Polly-wog,"
Or likewise, "Ugly James,"
Or "Gape-a-grin," or "Toad-gone-wrong,"
Or "Billy-Bandy-knees";
The Frog is justly sensitive
To epithets like these.
No animal will more repay
A treatment kind and fair,
At least, so lonely people say
Who keep a frog (and, by the way,
They are extremely rare).