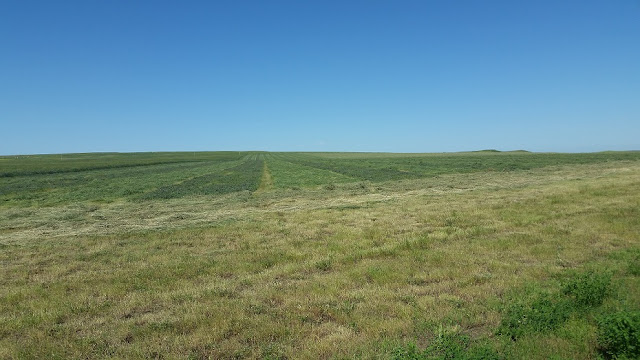 When you look out to the greener part of this field, you can see a darker purple/green shade and then a lighter green shade in the hay that is mowed.  This field yields strong to alfalfa, but also has crested wheat grass mixed in with it.  The purple shade is the flowers from the alfalfa being mowed in that direction.  The lighter shade is the mowing on the trip back.  This is some of the best hay EVER cut and baled on this ranch.  We've never seen hay like this in years -- maybe ever.  Hubby's dad, an 87 year old Grandpa says he's never seen hay like this in all his years and he has lived here his entire life. 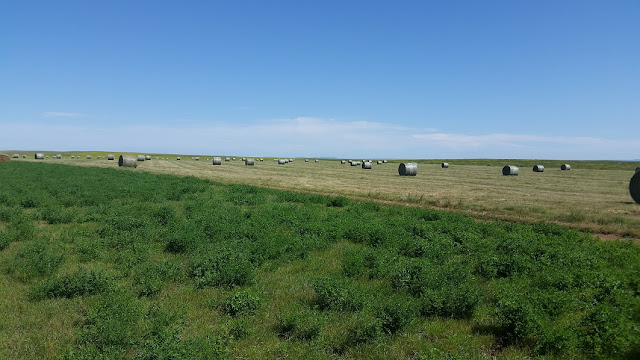 The green grass and alfalfa in the foreground was cut and baled a week or so ago and look at how much has grown back!  We do not usually get a second cutting of hay except for the very low, wet patches here and there and that is rare. 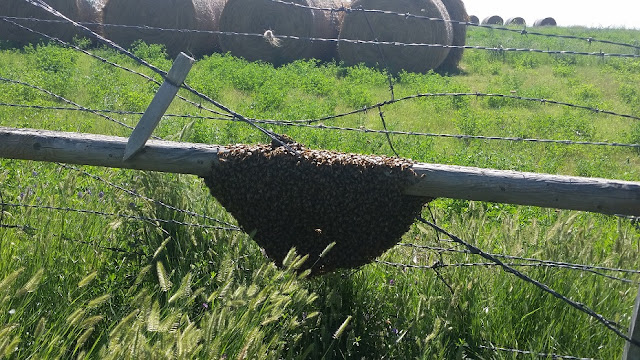 On the way out to the hay field today, I saw from a distance what looked like someone's jacket or a towel left on the cross bar of the fence brace.  As I got closer, I could see that it was not that at all, but instead it was a swarm of bees.  We have several boxes of bees on the ranch this year.  The folks that put them on us and lots of other ranchers will have a good honey year since we have gobs and gobs of sweet clover.  I guess these bees decided to go pioneering and find a new place to call home. 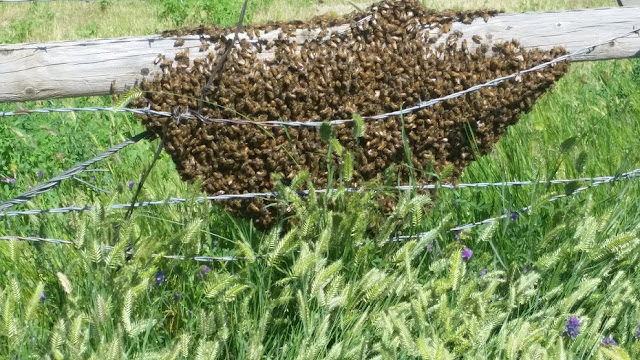 Here's a close-up photo of the bees.  Maybe they'll be gone tomorrow.  Who knows?

The baby birds are here and there in the back yard and front yard and in the pastures.  I saw the baby hawk as I drove past the swarm, but didn't have my camera ready for it.  Our world is alive with so many things growing.  It's wonderful to see and to be right in the thick of it.